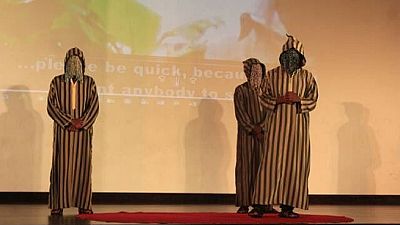 A faceless investigative journalist in Ghana has set twitter ablaze with a question asking about his own identity. Despite having lived and worked in Ghana all his life, Anas’ face has remain hidden.

He is on record to have described his anonymity as his secret weapon as he seeks to ‘name, shame and jail’ the bad guys.

Anas Aremeyaw Anas is set to release a documentary film on corruption in Ghana football. The said piece titled Number 12 premiers in the capital Accra on June 6.

But as his team, Tiger Eye, prepare for for the release, a lawmaker has released purported photos of the hitherto publicly unknown journalist who has a dozen human rights and anti-corruption documentaries to his name.

With the said releases, he asked followers on Twitter who they thought Anas was. The hashtag ‘I am Anas,’ #IamAnas has raked varied responses as people post everything from the ridiculous to the impossible as their contribution, and for each tweet Anas’ handle retweets.

Let's see all the pictures of Anas you have. #IamAnas pic.twitter.com/9RumsnicPk

Hahaahahahaha! Aren't we liking this play play! And the bad ones have not seen the Video! What fear can do to people ehn. Whew! Free Africa from evil men! #IsupportAnas pic.twitter.com/apL9Ttioap