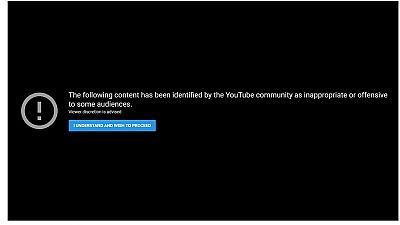 Egypt’s top administrative court ruled on Saturday that regulators must block the video file-sharing site YouTube for one month over a video that denigrates the Prophet Mohammad, a lawyer who filed the case told Reuters.

The Innocence of Muslims trailer has been the subject of controversy since it was released in 2012.

In 2013, a lower administrative court had ordered that the Ministry of Communications and Information Technology block YouTube, owned by Google, over the video, but the case was appealed and its ruling stayed during the appeal process.

The ministry at the time said it would be impossible to enforce the ruling without also disrupting Google’s Internet search engine, incurring potentially huge costs and job losses in the Arab world’s most populous country.

The Ministry of Communications and Information Technology is yet to comment on the latest ban and neither is there confirmation that Saturday’s ban is being implemented.

Quartz Africa reported that its sources in Egypt confirmed that YouTube was still accessible on Monday 28 May.

Mohamed Hamid Salem, a lawyer who filed the case in 2013, said the ruling also orders that all links that broadcast the film be blocked.

The ruling is considered final and cannot be appealed.

The film “Innocence of Muslims”, a low-budget 13-minute video, was billed as a film trailer and made in California with private funding. It provoked a wave of anti-American unrest in Egypt and other Muslim countries when it appeared in 2012.

YouTube took down the video following the protests, but in 2015, a US federal appeals court ruled in 2015 that the website should not have been forced to take it down. The video was then reposted on YouTube, with a warning that cautions viewers it contained material that was ‘inappropriate or offensive to certain audiences’.

During the build up to this year’s presidential election, one of the aspirants who is also a member of parliament, Mortada Mansour, pledged to ban Facebook if elected president.

In March this year, the communications minister launched its own social networking site, Egypt Face, to compete with Facebook, pledging to protect citizens’ data and fight extremism online.

Car hailing apps, Uber and Careem have also been at the receiving end of court orders halting their operations in the North African nation, following protests from native taxi drivers.