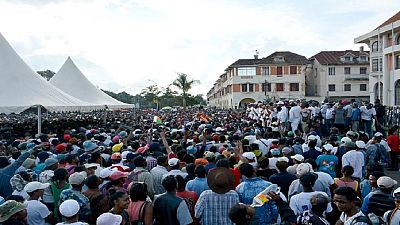 Madagascar’s opposition called on Friday for the government to resign, a day after after the High Court ruled election laws as unconstitutional.

Supporters of opposition politician Marc Ravalomanana, who served as president from 2002 until he was toppled in a 2009 coup, say the new laws were intended to stop him from running in an election due later this year on a date yet to be announced.

In a decision published on its website on Thursday night, the High Court said the laws “must be extinguished for non-compliance with the constitutional principle of equality between candidates in the various elections”.

The logical consequence of this decision is the resignation of the government.

“The decision of the High Constitutional Court is a first victory,” Hanitra Razafimanantsoa, ​​Vice-President of the National Assembly and a member of Ravalomanana’s party, told reporters in the capital Antananarivo.

“The logical consequence of this decision is the resignation of the government,” he added.

The dispute over the election laws has spurred violent protests.

At an opposition march last month against the laws, police fired teargas at demonstrators and two people later died from their injuries.

The opposition says the laws could be used to block Ravalomanana from standing due to criminal convictions arising from trials that took place while he was in exile after the coup. It is also challenging provisions on campaign financing and access to media.

Ravalomanana has teamed up with the man who succeeded him, Andy Rajoelina, to oppose the laws, which have been backed by President Hery Rajaonarimampianina.