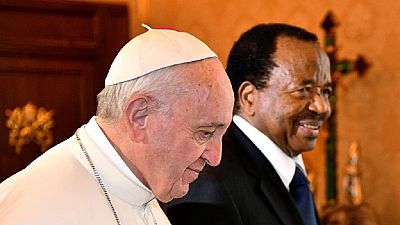 The Cameroon government has reportedly banned the Catholic Church from extending humanitarian aid to persons fleeing the security crisis in the restive Anglophone regions.

According to a journalists with Equinoxe TV, a renown priest had bee questioned for distributing foodstuff to people stranded by the ongoing crisis.

“I am reliably informed that church leaders have been banned from assisting displaced anglophones who fled military brutality and burnings of their houses. A renown man of God has equally received a query from the state for distributing foodstuff to the people in despair,” Mimi Mefo said in a tweet.

Efforts to reach a Cameroonian government official for a comment on the issue proved abortive as non was available to respond to our call.

Thousands of Cameroonians have routinely fled their homes into forests for fear of attack by the security forces. The army has repeatedly dismissed attacks on civilian populations stressing that its actions are within limits of its operation.

The United Nations refugee agency in neighbouring Nigeria has recorded over 20,000 refugees who fled the fighting back home. They are said to be living in dire straits as the UNHCR continues to seek funding to support them.

The Catholic Church has been a vocal civil society group all through the crisis in Cameroon’s Northwest and Southwest (Anglophone) regions. They have repeatedly called for a peaceful resolution to the crisis.

The international Crisis Group has identified the church as the most potent political mediator between the government and separatist elements.

It’s April 26 report titled: Cameroon’s Anglophone Crisis: How the Catholic Church Can Promote Dialogue, averred that the clergy needed to united with a strong common position (between federalism vs. decentralisation) in order to be seen as credible mediators.