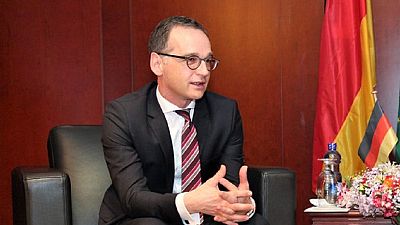 Germany’s new foreign affairs chief, Heiko Maas, is in Ethiopia for the first leg of his two-nation African trip. Maas’ trip has started in Ethiopia and will end in Tanzania.

It is his first African mission since taking office barely two months ago. He has held meetings with the Deputy Chairperson of the African Union on a number of mutual issues including financing the A.U.

He is scheduled to meet Ethiopian government officials for talks after which he is expected to visit Tanzania on the final leg of his trip.

I will use my talks with the Government and representatives of other parties and civil society to encourage Ethiopia to launch the reforms that will bring the country lasting stability, internal peace and development.

“I am looking forward to my first trip to Africa as German Foreign Minister. We have close and special relations with many African countries. These relations are important to us and we want to foster and expand them, his office said in a statement on May 2.”

What the statement said about Germans relations with A.U., Ethiopia and Tanzania

“We value the role of the African Union and African regional organisations in conflict prevention and peacekeeping. That is why we are one of the African Union’s closest bilateral partners and why we seek close exchange, especially on the topics of peace and security and as regards our cooperation at global level.

“Despite the ongoing state of emergency in Ethiopia, the latest signs of reconciliation provide grounds for optimism. I will use my talks with the Government and representatives of other parties and civil society to encourage Ethiopia to launch the reforms that will bring the country lasting stability, internal peace and development.

“In Tanzania, I will meet school pupils who are learning German at one of our partner schools. In a frank discussion with the Government and opposition, my aim will be to convey that lasting economic development is fostered by political and economic freedom and the rule of law.

“And above all, 100 years after the end of the First World War, I would like to remember the African victims of this war, who all too often are forgotten in Europe.”