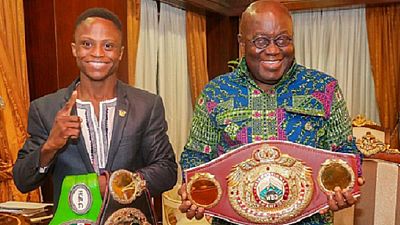 According to president Akufo-Addo, the young boxer had made the nation proud, ‘I am confident that he is destined for greatness,’ the president added in a twitter post.

Congratulations to Isaac Dogboe on becoming WBO Junior Featherweight Champion, and, in so doing, Ghana’s youngest-ever boxing world champion. We are proud of him, and I am confident that he is destined for greatness. pic.twitter.com/EohtWWZJyH

Nicknamed the Royal Storm, Dogboe shook off some set backs earlier in the bout before proceeding to knockout his opponent with a round to spare.

Ghana’s boxing legend, Azumah Nelson, who dominated the sport in the 90s has released a statement congratulating the young boxer.

“I watched with the excitement and pride how you demonstrated bravery, determination and resilience against an undefeated champion Jessie Magdaleno in his country and more importantly not to allow the judges to decide the outcome of the bout letting you ferocious fists to decide.

“That has always been my philosophy which I have shared with you, that is, going into the ring with your own judges and referee,’’ Azumah said.

Congrats champion Isaac Dogboe. Hard work and perseverance leads to success. You’ve made Ghana proud. You have to sustain that hunger in order to emulate the greatest, Azumah Nelson! #dogboeworldchampion pic.twitter.com/lPAuTDXUXC

Paul didn’t lie when he said we would see Azumah reborn.

Isaac Dogbe was floored in the first round. His legs got wobbly at certain points. But the kid came back in brilliant fashion; fought his heart out, imposed his will and took his moment. The future of Ghana boxing is in safe hands.

Rawlings was the first important person to have recognized Dogbe. It tells how his govt developed sports in his time https://t.co/wreqPemMEb 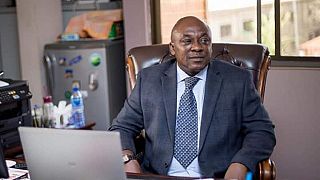