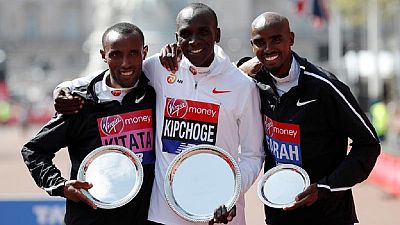 It is his third victory in London having previously won the title twice in succession. He finished the race in a time of 02:04:17. The runner-up came in with 02:04:49.

He took a break from the London Marathon last year to try to run a sub-two-hour marathon in Italy, Kipchoge returned to add to his 2015 and 2016 titles with ease, finishing ahead of Ethiopia’s Tola Shura Kitata and just two-and-a-half minutes off Dennis Kimmetto’s world record.

According to Reuters, Kipchoge raced out of the start, with the leading group registering a blistering opening mile of four minutes 22 seconds, but saw his flying start drop as temperatures rose over 20 degrees Celsius.

“The crowd were really wonderful – I loved them.” EliudKipchoge after his Virgin Money London Marathon win today! #LondonMarathon #SpiritofLondon pic.twitter.com/J7SZqULJkg

Farah finished third but with a British record time. He overcame early setbacks that put him way behind leader Kipchoge but still registered a time of 2:06:32 to break Steve Jones’s British record achieved in 1985.

“My season has been really good and my training actually doesn’t need to be tested. It doesn’t need to have a race in Europe or America or anywhere to test my body. So the training is fully actually testing my body,” Kipchoge has stated ahead of the race.

Kipchoge has now won nine career marathons – including Hamburg, Rotterdam, Chicago, London, Berlin and Rio – he holds the London course record during his victory in 2016.

The 2018 edition has been tagged one of the world’s warmest events. “So it is the warmest on record. There is a context that it is slightly warmer than we have had previously. We have this advice going out from our medical director and I just wanted to let everyone know that’s the current situation,” an organizing official said.

2016 Berlin Marathon winner Ethiopia’s Kenenisa Bekele was targeting a first victory in the London edition but he ended up at sixth position with a time of 02:08:53.