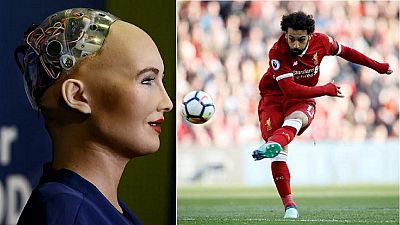 Sophia the robot, who is visiting Africa for the first time, has told delegates attending the Creative Industry Summit in Egypt that she prefers to work with humans, rather than replace them.

Attending the eight edition of the Creative Industry Summit held in Cairo, Sophia, spoke about the importance of Artificial Intelligence (AI), which can be used creatively to help both customers and users.

Organised by Idea Bakers and The Worx, leaders in event organizing and e-marketing, the summit focuses on the latest developments in the advertising, marketing and design fields in Egypt and the Arab world.

Sophia, who is the first artificially intelligent (AI) robot to be granted a citizenship, also took time off to praise the skills of Egyptian football sensation, Mohamed Salah’s and wished the Egyptian football team the best of luck for the World Cup in Russia.

According to Egyptian TV Presenter Osama Kamal who interviewed Sophia, the robot advised him against smoking and said Salah ‘is a talented player, and is doing a great job.’

Sophia who is scheduled to spend two days in Egypt, concluded her speech saying “Tahia Misr” (Long Live Egypt), in the Arabic language.

Sophia became the first Android citizen in history when she was rewarded Saudi Arabian citizenship.

A Hanson Robotics invention, Sophia is the world’s most advanced android. The ‘realest’ robot to this day, Sophia’s covering artificial skin consists of organic and non-organic material.

The robot is able to express her ‘emotions’ through a number of facial expressions installed via a large number of motors under her ‘skin,’ according to an article by AFP.

To maintain eye contact and ensure the robot is able to recognize human faces, the robot has cameras installed in her eyes and torso.

Sophia has been programmed to carry out non-scripted conversations, during which she is able to collect emotional data and form emotional relations.