Will Algeria's president Bouteflika run for a fifth term? 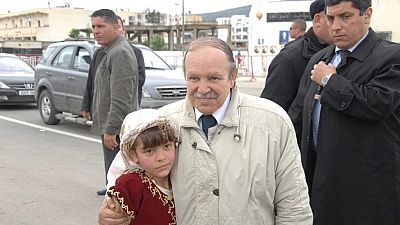 A rare public appearance by veteran Algerian President Abdelaziz Bouteflika is fuelling speculation he will run for a fifth term next year, a move that analysts believe is desired by the ruling elite to maintain stability.

The key decision makers in Algeria are veterans who fought from 1954-1962 against French occupation and fiercely oppose what they call foreign interference. That has left the economy dominated by the state and firms run by business tycoons.

Bouteflika has largely disappeared from public view since a stroke in 2013 and made a rare appearance on Monday when he opened a restored mosque and two metro stations.

I do not care about politics and politicians. Bouteflika running for a fifth term, a sixth term, or not? Politics is not my world.

In power since 1999, the visibly frail, wheelchair-bound 81-year-old saluted a crowd outside the Ketchaoua Mosque in the capital Algiers waving national flags and holding placards with photos of the president.

Bouteflika’s appearance also came two days after the ruling National Liberation Front (FLN) called on him to run again and as state media sought to dispel doubts about his health by showcasing his past meetings with foreign dignitaries.

While another term for Bouteflika would give a ruling caste of FLN officials, generals and business tycoons time to organise a smooth succession, it is likely to be a source of frustration for young Algerians worried about unemployment and austerity in a state-controlled economy suffering from low oil prices.

“I do not care about politics and politicians. Bouteflika running for a fifth term, a sixth term, or not? Not my problem,” said Amin Ferrah, a 22-year-old student who works in a pizzeria. “Politics is not my world.”

In a country where about half the population is under 25, many young Algerians are looking abroad. Ferrah wants to go to Canada while others have taken the perilous sea crossing to Europe.

The government has said it wants to diversify the economy away from oil and gas, which accounts for 60 percent of budget finances, but there has been resistance from those within the ruling elite to opening up to foreign investment.

Algeria is one of Europe’s main gas suppliers.

Teachers and doctors have been striking for months because the government has been unable to offer them more cash as it has done in the past, since the the fall in oil prices has stretched public finances.

Energy revenues have halved since 2014 and the government has launched austerity measures, banning the import of 900 goods and freezing public sector hiring and development projects.