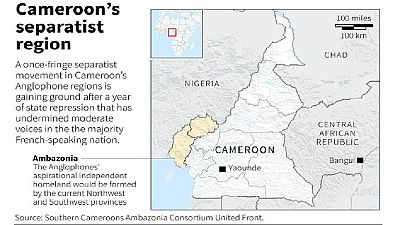 The United Kingdom has issued a travel alert for Cameroon warning nationals to totally avoid travel to within 40km of the country’s borders with Nigeria, Chad and Central African Republic.

It also said Brits should not travel to the Bakassi Peninsula and specifically to the Ndian Division of the South West region. For the other parts of the Anglophone region, the directive said all but essential travel should be undertaken.

A summary of the March 27 directive issued by the Foreign and Commonwealth Office (FCO) read: “the FCO now advise against all travel to within 40km of the Cameroon/Nigeria border and Ndian division, and against all but essential travel to the rest of the North West and most of the South West regions; updated information on kidnaps and clashes in the North West and South West regions.”

There have also been multiple exchanges of fire between the Cameroonian security forces and armed groups over the past few months in some towns and villages in the North West and South West regions.

The U.K. position follows that of France earlier this week. The French Ambassador to Cameroon, Giles Thibaut tweet on Monday that the Anglophone regions were a no-go area for French nationals. The alert also cautions against all but Cameroon’s borders with Gabon and Congo.

It specifically mentioned the Koupé-Manengouba, Lebialem, Manvu and Meme divisions in South West region and the rest of North, North West and Adamawa regions as places that citizens should be careful when going to.

“The FCO recounted the March 2018 kidnapping of Tunisian and Cameroonians workers which rescue operation led to the death of a Tunisian. They also related recent armed exchanges between suspected separatists and security forces.

“This follows violent and deadly clashes between demonstrators and the Cameroonian security forces in the North West and South West regions in September and October 2017. Restrictions including night curfews, a ban on public meetings and other restrictions remain in place,” the statement added.

The government of Cameroon will accept dialogue as part of measures to end the Anglophone crisis, Interior Minister Paul Atanga Nji is reported to have said. https://t.co/fQGnrs47Cg