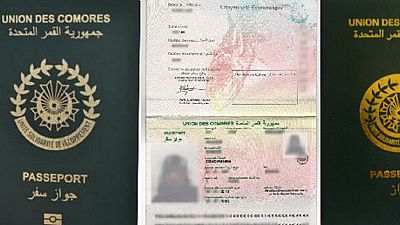 A programme to sell Comoros Islands citizenship to fund development resulted in thousands of passports being sold outside official channels via “mafia” networks and up to $100 million of revenues went missing, according to a report by the small Indian Ocean state’s parliament.

The report, produced by a parliamentary commission set up in June 2017 to investigate the citizenship programme, also said former presidents Ahmed Abdallah Mohamed Sambi and Ikililou Dhoinine, who were in power when the alleged abuses took place, were “suspected of the embezzlement of public funds.”

The programme was flawed from its inception and the current Comoros government should seek international help to recover the missing funds and take officials involved to court, the report concluded.

The at least tacit complicity of authorities at the highest levels with the parallel networks inside and outside the country has turned the Comoros passport into a product advertised for sale on the international market.

In a video posted on Facebook, Sambi rejected all accusations against him, saying they had been fabricated to discredit him. He didn’t respond to a request for further comment.

Ikililou told Reuters by telephone that he could not comment on the report as he had not read it yet. Both men have previously said they believed the scheme would help develop the country, an archipelago off the east coast of Africa.

The report was completed in December but has not been publicly released. Reuters has reviewed a copy that was signed by Dhoihir Dhoulkamal, head of the commission and an independent member of parliament.

Abdallah Tocha Djohar, a Sambi supporter initially on the commission who later called for it to be disbanded, said the report had not been officially approved by the entire commission and its disclosure violated procedures relating to how the commission should operate.

The current Comoros government, led by President Azali Assoumani, has said it has suspended citizenship sales since coming to power in May 2016.

Nearly a decade ago, Comoros launched a programme with the United Arab Emirates and Kuwait to sell citizenship to stateless people in those countries, known as Bidoon, in return for cash to help develop the poor Indian Ocean archipelago.

The scheme was dogged by controversy from the beginning, with some members of parliament and civil society saying the changes to Comoros law that allowed the sale of citizenship were made illegally.

The cross-party commission found that the law allowing the sale of citizenship was changed during a parliamentary session that violated its own procedures.

The bill that was promulgated lacks the correct signatures and stamps, and does not officially figure on a list of laws passed by the National Assembly, the commission found.

Critics of the passport programme also called for more transparency over revenues from the Gulf after promised development projects failed to materialize.

While most of the passports were sold to Bidoon, Comoros and Emirati officials said a number of passports had also been sold to other foreigners.

A Reuters investigation published last year found that two Iranians accused by the U.S. government of breaking sanctions were among those who bought Comoros passports via the networks that sold documents outside the official programme.

The parliamentary commission estimates that the overall sum of government revenues from the passport sales to have gone missing amounts to around 17 percent of the country’s gross domestic product in one year.

The commission said that the secrecy of contracts, lack of documentation and variety of groups of officials involved in passport sales complicated efforts to establish how much money went missing.

However, by analyzing the number of passports issued without official approval and the shortfall in revenues from those sales that were approved, the commission estimated an overall revenue gap of about 43 billion Comoros francs ($100 million).

The commission’s report is due to be debated in parliament when the next session begins in April. A spokesman for Assoumani said that the president had not yet received a copy but the president would analyze the findings.

“If some people are found to have embezzled money or broken the law, there is no doubt that steps will be taken to establish who is responsible,” Mohamed Ismaella, Assoumani’s spokesman, said.

Complicity of the highest office

According to Comoros law, sales of citizenship to a foreigner must be authorized by the president.

The commission said that a database showed that nearly 48,000 foreigners, including mostly Bidoons, received passports, about 6,000 more than the official number approved by the president, highlighting the scale of sales outside the official channels.

The high volume of passports being issued meant that the top Comoros security official’s signature was scanned and shared on the government’s computer system, scrapping the need for him to manually sign off on each individual document, according to the report.

Three former interior ministers and two former intelligence chiefs told the commission said that the set up allowed for passports to be produced without the relevant Comoros authorities always being aware.

“This allowed for the emergence of parallel mafia networks selling Comoros passports,” the report said. “The at least tacit complicity of authorities at the highest levels with the parallel networks inside and outside the country has turned the Comoros passport into a product advertised for sale on the international market.”

The report did not say which possible mafia networks it referred to.

The first phase of the scheme, under Sambi, who was in power from 2006 to 2011, was meant to earn Comoros $200 million in return for giving citizenship to 4,000 stateless families. Emirati officials told the commission they had paid the money in full but the report said there was little trace of the money in Comoros public accounts.

“The serious accusations leveled against me by the parliamentary commission of enquiry are baseless,” Sambi said in statements made in the local Comorian language and posted on Facebook.

After a brief suspension, the scheme was continued by Dhoinine in 2011. A new agreement set the price of a passport at 4,600 euros, and said a minimum of 5,000 passports would be issued.