Named Sudan, the 45-year-old animal was housed at the Ol Pejeta conservancy in – a 90,000-acre not-for-profit wildlife facility in Kenya’s Laikipia County. There are only two more white rhinos left in the world, the remaining females also live at the same facility.

Reports had emerged two weeks ago that Sudan was recovering from an infected leg hence the conservancy had put on hold a decision to euthanise him. The rhino had spent weeks lying in his pen due to discomfort from a deep wound on his right hind leg.

“Sudan was being treated for age-related complications that led to degenerative changes in muscles and bones combined with extensive skin wounds. His condition worsened significantly in the last 24 hours; he was unable to stand up and was suffering a great deal,” Ol Pejeta said.

The veterinary team from the Dvůr Králové Zoo, Ol Pejeta and Kenya Wildlife Service made the decision to euthanize him.

Ol Pejeta veterinarian said at the time: “Seven days ago we thought that we would make that decision because then one morning he could not rise, he completely was unable to rise.

“But then after some medication that we gave for pain and antibiotic he was able to stand up, that gave us hope and just maybe we would like to give him a chance at life. The decision to euthanise him has been put on hold.”

Sudan lived with the last two females of the same species in the conservancy. Decades of rampant poaching have drastically cut numbers of northern white rhinos as their horns can go for up to $50,000 per kilo, making them more valuable than gold or cocaine.

Scientists at the time were working to help Sudan reproduce via in-vitro fertilization.The embryo was to be implanted in a surrogate southern white rhino, Ol Pejeta confirmed that Sudan’s genetic material had been collected, adding that it “and provides a hope for future attempts at reproduction of northern white rhinos through advanced cellular technologies.” 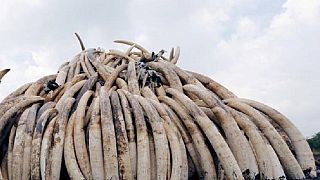 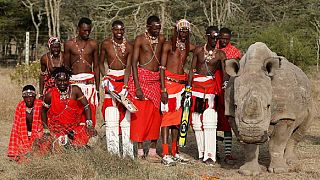 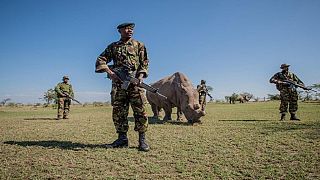