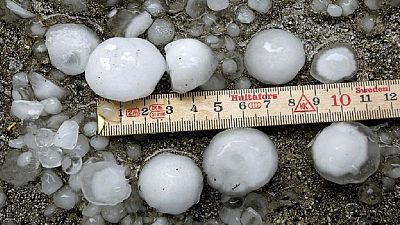 A devastating hailstorm on Wednesday (March 14) swept through Lesotho causing death and destroying properties including roads and buildings.

Emergency personnel treated a number of school children who were caught out in the open during the storm. Hailstones left them with cuts on their heads and bruised hands, the report added.

Photos shared on twitter corroborated the incident with one of the most shared material being of a truck that was being swept away in the raging floods.

Channel Africa radio station which followed the development quoted a district disaster management officer as saying that four people died in the truck incident. “When it was right in the middle of the river‚ there was huge water and debris … The truck overturned‚ about 10 people were dragged out but six of them managed to be rescued,” he said.

Meanwhile, weather forecast in South Africa indicates that there could be heavy rains across the country’s Eastern Cape and Kwazulu-Natal provinces.

“The Eastern Cape and Kwazulu-Natal will have cloudy‚ cold and wet conditions. By Saturday these conditions are expected to start clearing and moving to Gauteng. The Western and Northern Cape are the only provinces that will have fine weather this weekend,” an official said on Friday.