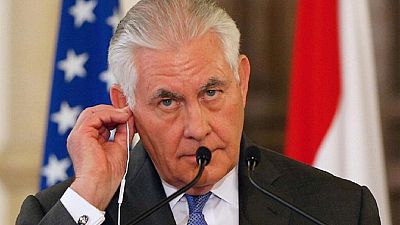 U.S. Secretary of State Rex Tillerson has resumed his normal schedule in Kenya after canceling events on Saturday because he was “not feeling well.”

Tillerson had cancelled events to seek respite from what has been an extraordinarily busy schedule, according to the State Department.

“The secretary is not feeling well after a long couple days working on major issues back home such as North Korea and has cancelled his events for the day,” said spokesman Steve Goldstein, who is accompanying Tillerson on his trip to Africa.

The secretary is not feeling well after a long couple days working on major issues back home such as North Korea and has cancelled his events for the day.

Goldstein added other Saturday events would proceed without Tillerson while others may be rescheduled and Tillerson was expected to resume his schedule Sunday.

After meeting Friday in Nairobi with Kenyan President Uhuru Kenyatta, Tillerson hailed the political reconciliation between Kenyatta and opposition leader Raila Odinga as “a positive step toward healing Kenya’s ethnic and political divisions,” the State Department said in a statement.

Kenyatta and Odinga met for the first time since last summer’s contentious presidential elections to start what they called a joint push for national unity.

Tillerson underscored at the meeting with Kenyatta “strong U.S. support for democratic institutions” — including the media — and voiced concern over “restrictions to political space.”

The Kenyan government shut down three television channels in January on the day that Odinga took a symbolic presidential oath in a mock inauguration. The government defied a court order to allow the stations, which had planned to live-stream the oath, to resume broadcasts.

After Tillerson met Friday with Foreign Minister Monica Juma, she said, moving forward, the government of Kenya is committed to a genuine political process based on fundamental values.

“I have reaffirmed and the president as well has reaffirmed Kenya’s commitment to the values of democratic governance, constitutionalism, the rule of law, and human rights,” Juma said.

Other topics of discussion during Tillerson’s meeting with Kenyatta were defeating terrorism in neighboring Somalia, political unrest in South Sudan and strengthening U.S.-Kenyan business relations.

Tillerson said the U.S. will seek to work with African nations, providing them with incentives to improve governance and meet their long-term security and development goals. He is on a five-nation trip to Africa that began earlier this week.

He arrived in Nairobi Friday from Djibouti. Tillerson kicked off his trip with a visit to Ethiopia on Wednesday, where he met with the country’s prime minister and the African Union Commission chief.