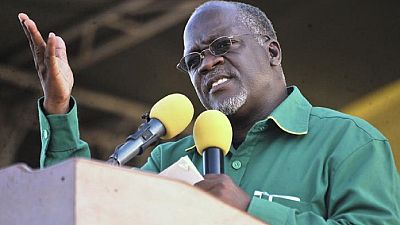 Tanzanian President John Magufuli warned on Friday of a crackdown on anyone who participates in illegal demonstrations, vowing not to let his economic reforms be derailed by street protests.

Magufuli, nicknamed “the Bulldozer” for his forceful leadership style, has introduced anti-corruption measures and tough economic reforms, including cuts to wasteful government spending, since taking office in November 2015.

“Some people have failed to engage in legitimate politics; they would like to see street protests everyday…Let them demonstrate and they will see who I am,” he told a public gathering in northwestern Tanzania.

Some people have failed to engage in legitimate politics; they would like to see street protests everyday...Let them demonstrate and they will see who I am.

Critics say his cost-cutting measures and policy changes are excessive and undermine growth in East Africa’s third-biggest economy by stifling foreign investment in critical sectors such as mining. Magufuli said the reforms were on course.

“We want to build a strong economy for all Tanzanians and we are on the right track. Let us be patient, Tanzania will become a land of honey,” the president said.

A senior police official said on Friday that security forces were on alert against street protests being organized via social media platforms.

A U.S.-based Tanzanian social media activist, Mange Kimambi, has called for nationwide anti-government demonstrations on April 26 to protest over a diminution of political freedoms and human rights abuses in his home country.

But the criticism is unlikely to hurt Magufuli’s government politically, after the ruling CCM party won a majority in recent local government and parliamentary by-elections.

The foreign affairs ministry dismissed the concerns of Western embassies as “sensational, ill-informed and inciting”.