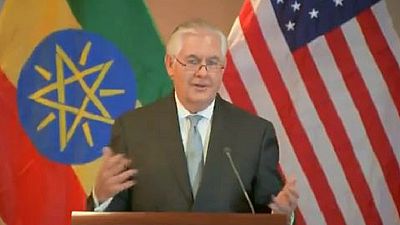 The United States says much as it shares security concerns raised by the Ethiopian government, the answer lay with ‘greater freedom and not less.’

Secretary of State Rex Tillerson reiterated the U.S. disagreement on a reimposed state of emergency. He stressed that the U.S. continued to monitor the ‘voluntary transition,’ ongoing in the country.

He was speaking during a press briefing along with Foreign Affairs Minister Workneh Ghebeyehu in Addis Ababa. He stressed the importance of strengthening the over 100 years of bilateral relations between the two countries.

We recognize the transition that is underway in Ethiopia, the first ever voluntary transfer of power, and I view this as a very positive symbol of this very young democracy in Ethiopia – a peaceful transition of power.

“We share concerns raised by government over the incidence of violence, loss of lives and we do firmly believe the answer is greater freedom of people not less.

“We recognize the transition that is underway in Ethiopia, the first ever voluntary transfer of power, and I view this as a very positive symbol of this very young democracy in Ethiopia – a peaceful transition of power.

“During recent events, the United States have expressed our concerns with the government’s decision to impose another state of emergency because it does put restrictions on fundamental rights like assembly and expression.

He touched on political reforms announced in January 2018 by the ruling coalition and the subsequent measures undertaken to actualize them. He stressed, however, that there was more to be done in that respect.

“We formally believe that democratic reforms, economic growth and lasting stability are best addressed through an inclusive political process rather than through the imposition of restrictions.

In a word of advice to the citizenry, he said: “We encourage the Ethiopian people as well to maintain patience, maintain support for your government through this change or this transition but also through this journey of pursuing democracy which takes time and effort. Democracy is not easy, it takes a lot of work.”