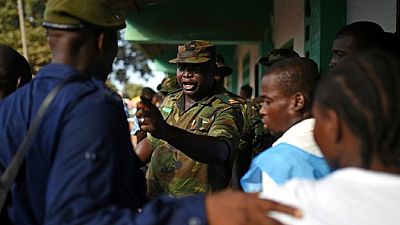 After a rather peaceful election, the tallying process has kicked off on a dramatic note as Police have raided the offices of the main opposition candidate, saying they were tipped off of a possible hack.

Local television station, AYV media, spoke to Julius Maada Bio of the opposition Sierra Leone Peoples’ Party (SLPP), who told them that Police sought to search his offices without a warrant and when denied entry, they were reinforced by riot police.

Maade Bio talking to AYV TV – says police tried to search premises without a warrant and returned in riot gear when refused entry. Claims it is effort to interrupt SLPP tallying of vote to cross-check results. #sierraleonedecides pic.twitter.com/c4H8oWn06v

Bio who said all they have at the office are computers and a mobile phone to verify results as they trickle in, believes the raid is an attempt by the ruling government to interrupt this process.

Bio’s team insists that they have a right to establish an independent tallying center, declaring the police raids as a form of intimidation.

The government spokesperson refuted allegations of intimidation, insisting that the national police doesn’t work for the ruling All Peoples’ Congress (APC) party, but rather has a a mandate to preserve law and order.

Meanwhile, counting is underway in most polling stations, even as police quells clashes between supporters of the ruling party and the opposition in some parts of the capital.

Govt Spokesman Baraytay says #SierraLeone Police is not a prop of the party. Says they have the mandate to preserve law and order so they can go where they choose so police action at Bio's residence should not be attributed to the APC. #SierraLeoneDecides #SierraLeoneElections