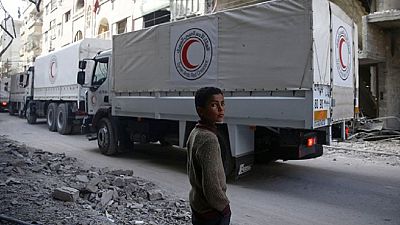 The competing demands of numerous global crises mean some 2.7 million people in Somalia who need food are at risk of being ignored by donors, increasing the country’s likelihood of famine, aid agencies said on Monday.

The Norwegian Refugee Council (NRC) and the U.N.’s World Food Programme said early action in Somalia would cost less than having to deal with famine.

“Whether it’s Syria, Iraq or South Sudan, the size and cost of response to international emergencies is growing, and all crises are having to compete,” Nigel Tricks, regional director at the NRC, told the Thomson Reuters Foundation.

Whether it’s Syria, Iraq or South Sudan, the size and cost of response to international emergencies is growing, and all crises are having to compete.

About 6.2 million people in Somalia – half the population – need emergency aid, such as food, water and shelter, due to unprecedented drought and ongoing conflict, the United Nations said in January when it appealed for $1.6 billion.

Aid agencies use the Integrated Food Security Phase Classification (IPC) system to determine food security. If 20 percent of households have an extreme lack of food and people are dying of starvation, then famine is declared.

Somalia, with a population of 12.4 million people, has not yet reached that stage but 2.2 million Somalians are facing a food crisis, the U.N. said in an email, with a further 500,000 facing an even more severe food emergency.

“It’s much cheaper overall to avert famines … but it’s hard for donors globally to keep coming up with the money when humanitarian needs are outstripping donors’ increased rate of funding,” said Peter Smerdon of the WFP.

The U.N., governments and donors will discuss Somalia at a meeting in London on Tuesday.

“The signals are that it is getting worse day after day. Therefore, an urgent assistance is desperately needed,” Shukri Ismail Bandare, minister of rural development for Somaliland, a northern region that operates autonomously, said by email.

Somalia’s 2011 famine killed 260,000 people. Half died before the official declaration of famine, which was caused by drought, war and lack of access for humanitarian aid.

The country has been mired in conflict since 1991. Its weak, Western-backed government is struggling to assert control over poor, rural areas under the Islamist militant group al Shabaab – challenging the delivery of aid to the most needy.