Ethiopia's Dibaba shines at world indoors, America's Coleman could be the next Usain Bolt 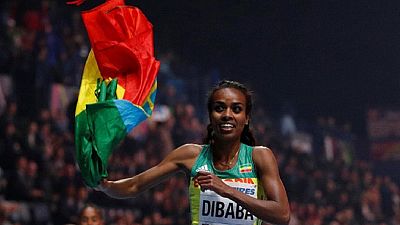 Christian Coleman looked every inch the natural successor to Usain Bolt as the fastest man in athletics, sweeping in a blur to a majestic 60 metres victory at the world indoor championships on Saturday.

A night of remarkable drama at Arena Birmingham saw Ethiopia’s Genzebe Dibaba win her second gold in three days in the 1,500 metres while Czech Pavel Maslak won his third 400 metres crown after a sensational double disqualification.

The next Usain Bolt?

Yet it was the 21-year-old American Coleman, winner of two silvers at last year’s world outdoor championships in London, who hogged centre stage, following up his world record of 6.34 seconds set last month with an emphatic win in 6.37 seconds.

I have a good chance to lead the sport in the post-Bolt era but like I’ve told so many others, loads of guys have the talent

It was the joint second fastest sprint in history, ensuring that the Atlanta flyer, the fastest man at 100 metres in 2017, has now run the three quickest times ever at the shorter distance.

“I have a good chance to lead the sport in the post-Bolt era but like I’ve told so many others, loads of guys have the talent,” the modest Coleman said after beating China’s Su Bingtian (Asian record 6.42) and U.S. colleague Ronnie Baker (6.44) to the big prize.

The peerless Ethiopian Dibaba, who had lifted the 3,000 metres title on Thursday, had her work cut out to achieve the double in the metric mile but produced another solo tour de force.

I am speechless, double gold! So happy!!! pic.twitter.com/9Yyp8qPCeA

It made her only the fourth athlete ever to win five individual gold medals in the championships.

“Last year I was sick (when finishing out of the medals at the world outdoor championships in London) but this time I was ready to run for my country,” she said.“This is a gold for all the people of Ethiopia.”

Dibaba helped Ethiopia to the second position on the medals table with a total of 5 medlas, with Team USA leading the medal standings with 18.