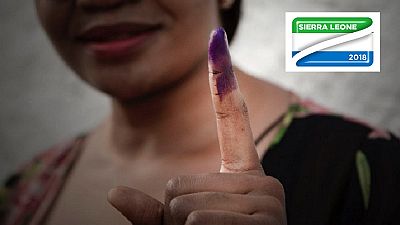 Sierra Leoneans go to the polls on March 7 to elect a new president and a set of legislators and local council representatives.

The process is seen largely as a test for its democratic credentials in the area of periodic elections. The West African nation will also be tasked with making the subregion proud as a hub for peaceful political transition following in the steps of The Gambia, Ghana and Liberia.

As part of our coverage of the process in our Africa Elections slot online, Africanews presents ten top facts as relates to the elections. Africa bids another president goodbye and is set to welcome a new face into its fold all things being equal.

This is the fifth straight general election since the return to multi-party democracy – 1996. But the third since the country came out of a civil war in 2002.

#2 – A new president will be elected

The country will definitely welcome a new president.
Incumbent Ernest Bai Koroma is ineligible to stand as per the constitution having served two terms.

#3 – 16 candidates have applied for the presidency

According to the Sierra Leone National Electoral Commission (NEC), 16 parties have filed nominations for the presidential poll.

#4 – A presidential duel between ruling APC and main opposition SLPP

The country operates a bi-cameral parliament of 124 legislators. But only 112 are voted for through ballots. The other dozen lawmakers (Paramount Chiefs) are chosen indirectly.

#7 – Key dates in the process include:

#8 – Persons with disability being catered for

The elections body has ensured that polling centers are friendly to people with disability principally via two ways – the building of ramps where necessary and the use of tactile ballot papers for the visually challenged.

The Sierra Leone elections body is headed by Mohamed N’fah Alie Conteh and he is assisted by four other commissioners. All things being equal he has the task of declaring the next president.