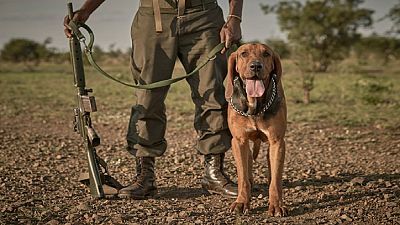 A new dawn to Kenya as the fight against poaching reaches a higher level. Ne strain of dogs have been incorporated to help track poachers in the Savannas. They are called the anti-poaching dogs with uniques feature to track poachers.

Five-month-old bloodhound Shakaria gambols through the long savannah grasses of Kenya’s Maasai Mara reserve, her playful mood swiftly turning to keen determination as she is ordered to track a human scent.

Rangers used to struggle to chase or spot poachers across the flat, seemingly endless grasslands, so the Mara Triangle first introduced two tracker dogs in 2009.

The unit is now comprised of four tracker dogs and two more trained specifically to sniff out ivory and guns at the entrances to the park.

The bloodhound puppies are being trained by former police officers Linda Porter and her husband John Lutenberg, who spent decades hunting escaped convicts across the United States.

In the late nineties, the Mara Triangle, which makes up a third of the entire reserve, was crippled by rampant poaching and such bad insecurity that one ranger recalls “tourists being robbed, stripped and dumped on the side of the road”.

Management of the reserve was then taken over by the Mara Conservancy, a public-private partnership with the local Maasai community.

While the dog unit has greatly reduced daytime poaching, other technology such as the use of a thermal imaging camera, has helped track poachers at night.