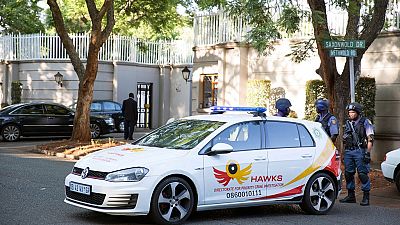 Elite South African police (The Hawks) have arrested a member of the Gupta family, in an early morning raid on the luxury Johannesburg home of the Gupta brothers, wealthy friends of President Jacob Zuma accused of influence peddling, the state broadcaster said.

A senior judicial source told Reuters that the police are expected to arrest between five and seven more people as part of the corruption investigation involving the Gupta family.

Other than the Gupta family home, police have visited properties belonging to Ashok Narayan, a Gupta associate and the offices of the Guptas’ Oakbay Holding company.

We can confirm that we are having an operation in Saxonwold, at the Gupta family compound, where our members are currently busy. We do not want to divulge more as to what is transpiring there due to the sensitivity of the operation.

According to the judicial source, the police has no plans as yet to arrest cabinet ministers who have been linked to the Guptas by the media.

Earlier, the spokesperson of the Hawks, Hangwani Mulaudzi, had confirmed the raid to journalists waiting outside the Gupta home.

“We can confirm that we are having an operation in Saxonwold, at the Gupta family compound, where our members are currently busy. We do not want to divulge more as to what is transpiring there due to the sensitivity of the operation,” he said.

The Gupta family has been linked to state capture involving the president, one of his sons, Duduzane, and a number of government ministers.

The State of Capture report by South Africa’s former state prosecutor Thuli Mandolesa accused the Gupta brothers of using their wealth to influence government business including the choice of ministers appointed by president Jacob Zuma.

There is a heavy police and Hawks presence outside the Gupta family's home in Saxonwold. Credit: Mia Lindeque/EWN#Guptas pic.twitter.com/rg9ZQR6FLL

The state capture report was initially contested by Zuma and he only appointed a commission of inquiry into the issues it raised, after the Supreme Court ruled that he must appoint such a commission.

Zuma and the Guptas have consistently denied allegations of any wrongdoing as alleged by the State Capture report.

The Hawks have conducted similar raids on the offices of the Africa National Congress’ secretary general Ace Magashule and the Mineral Resources minister Mosebenzi Zwane, in connection with a multi million rand Estina dairy project that the Gupta family reportedly influenced.

Meanwhile, South Africa’s presidency told the media to ‘await official notification’ of a media briefing by the president, amid expectations that he is about to resign as head of state.

The presidency statement came after media reports that Zuma would brief the nation at 0800 GMT to respond to a ruling party order that he should step down as national President.