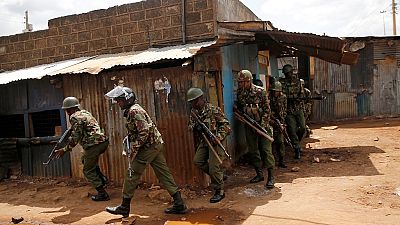 Kenyan police on Friday arrested an opposition lawyer as the government defied a court order to lift a ban on three private television stations that had covered the symbolic presidential inauguration of opposition leader Raila Odinga.

Miguna Miguna has declared himself the “general” of Odinga’s National Resistance Movement, which was declared a “criminal group” because of its stated intent to establish a parallel government after last year’s disputed election.

The lawyer was detained in a dawn raid on his Nairobi home. Miguna had stood beside Odinga at Tuesday’s symbolic “swearing in”, a blatant challenge to the authority of President Uhuru Kenyatta.

We urge the Government and the opposition in Kenya to work towards resolving the current situation through dialogue, with full respect for the rule of law and the rights to freedom of expression, association, assembly and political participation.

Alongside its tweet about Miguna’s arrest, Odinga’s NASA coalition posted video online that showed shattered glass strewn across the front entrance of his house. Police spokesman Charles Owino did not answer his phone when called for comment.

Police did not try to break up the symbolic inauguration, attended by thousands of Odinga supporters, but the government condemned it as an “illegal act” and took three private television stations off-air for covering the event.

The broadcasters remained shut on Friday, despite a court order telling the government to lift its block. It was not clear if the government planned to appeal the order; government spokesman Eric Kiraithe said he had no immediate comment.

After last August’s presidential election was annulled, Odinga boycotted the re-run, saying the process was still rigged. As a result, Kenyatta won a massive victory, but one that Odinga’s camp says is illegitimate.

This week’s arrests and broadcast bans have marked a step up in the tensions that followed an already tumultuous election season, and are a shock to Kenyans who have grown used to the free-wheeling media and irreverent political culture that have taken root since the end of decades of autocratic rule in 2002.

The government’s failure to adhere to a court edict ordering it to lift its suspension of the broadcasters also raises questions about the rule of law in East Africa’s most vibrant and important economy.

Okiya Omtatah, an activist who secured the ruling, said the court order had not been served on Thursday afternoon because of a delay at the court registrar’s office.

Omtatah later told Reuters that the courier he had sent to deliver the papers to Kenya’s communications authority had been detained by men in dark suits who said they were police but refused to provide identification.

“They released him at 10 with a stern warning not to come back to serve the orders, so I have come here myself, but I am being been denied access,” he said by phone from outside the authority’s office.

The court order was also published in Friday’s edition of the Standard newspaper, one of Kenya’s largest dailies.

“I am insisting on delivering this order,” Omtatah said. “It’s an abuse of power. The laws are clear. That’s why the court ruled as they did.”

The office of the U.N. High Commissioner for Human Rights in Geneva said it was concerned at the government’s “attempts to interfere with the rights to freedom of expression”.

“We urge the Government and the opposition in Kenya to work towards resolving the current situation through dialogue, with full respect for the rule of law and the rights to freedom of expression, association, assembly and political participation,” spokesman Rupert Colville said.

Elisha Otieno, a 50-year-old businessman in downtown Nairobi, said the stations should be allowed to reopen: “The government is not upholding its own laws. It’s a dictatorial style of leadership.”

But 28-year-old construction worker Edward Chege said some of the broadcasters were partisan. “The government has got its own reasons for shutting down these media houses for their own security.”

On Thursday, opposition lawmaker Tom Kajwang, who administered Odinga’s “oath”, was freed on bail a day after being arrested.