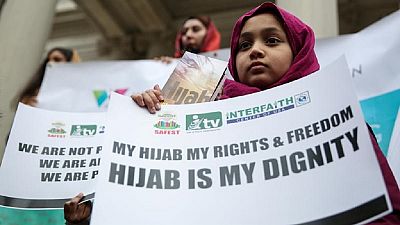 Every year February 1 is marked as ‘World Hijab Day.’ Its mission is to fight discrimination against Muslim women through awareness and education.

It is a day on which women of diverse backgrounds and persuasions are encouraged to wear the Islamic head veil in solidarity with Muslim women.

According to its founder, Nazma Khan, the movement she started in 2013 continues to grow in stature across the globe. The nonprofit organization uses ambassadors, organizers, volunteers and participants to rally support for its activities.

But most importantly, you learn and realize under this fabric lies a soul, a heart, a human being just like everyone else.

According to her, the day was part of efforts to end hate in the world by driving home the need to accept each others differences. “My dearest sisters, when you choose to put on that hijab, in solidarity with Muslim women, you are taking a stand against bigotry, prejudice and discrimination against Muslim women who choose to wear the hijab on a daily basis.

“But most importantly, you learn and realize under this fabric lies a soul, a heart, a human being just like everyone else,” she added, thanking people who were making the day a global success.

People across Africa have made a strong showing by contributing to photos shared on the World Hijab Day’s official Twitter handle.

When you see yourself clearly, with eyes full of love and acceptance ,you hold space for others to meet you at your highest self #WorldHijabDay pic.twitter.com/q8R01LyriJ

Solidarity hijabis also will not be left out as they tweeted photos with their experiences covering their hair. The twitter hashtag #WorldHijabDay and #StrongInHijab is been used worldwide.

“I support #WorldHijabDay because I know what it’s like to be a minority and I believe in one’s right to freely their values and identity.”-Michaela, United States #StrongInHijab pic.twitter.com/wa6lB4xkd6

“Muslim, Jew, Christian, Pagan, Atheist or whatever religion you follow, we are all one humanity, sharing this one planet. If we could all learn to coexist and get along, life would be so much richer!” Ashley ~ USA #WorldHijabDay #StrongInHijab pic.twitter.com/gPjWdU7yiV

“Shout out to all my Muslim sisters! I am not Muslim, I am Christian but I strongly believe in love everyone and supporting every1 in the best way! Hijabs Empower those women, make them feel beautiful, clothed in modesty and beauty.”-Cameron, Canada #StrongInHijab #WorldHijabDay pic.twitter.com/b9KwWPNJVQ

“I love knowing other cultures and religions for a world with more tolerance and respect.”-Marian (Catholic, Spain) #WorldHijabDay #StrongInHijab pic.twitter.com/S2ZA3JkS2Z

“I’m not Muslim, but I’m lucky to have many Muslim friends. They make my life better daily. <3"-Elizabeth Fischer#StrongInHijab #WorldHijabDay pic.twitter.com/w42jiiAl4j