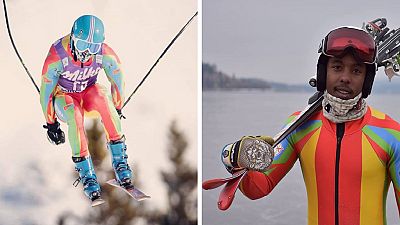 Eritrea will be represented at the upcoming Winter Olympic Games scheduled for the South Korean city of Pyeong Chang. The East African country is will be present specifically in skiing, specifically the slalom and giant slalom events.

Athlete Shannon-Ogbani Abeda who has Canadian citizenship will be contesting for the country of his parents’ birth. He made the decision to represent his native country in 2011. He has since represented Eritrea at the 2012 Youth Olympics in Austria.

The 21-year old Computer Science student grew up in Canada where his parents lived as immigrants. The CBC Sports website quotes him as saying he ‘wears both national identities with pride.’

I've been very humbled by the response and support I've received, especially from the Eritrean-Canadian community. They look up to me and I never imaged myself being in that position.

“I have grown up here with a lot of friends who are Canadian but I also have that connection inside to who I am as an Eritrean,” Calgary-based Abeda said.

“I’ve been very humbled by the response and support I’ve received, especially from the Eritrean-Canadian community. They look up to me and I never imaged myself being in that position.”

Shannon O Abeda will represent #Eritrea at the winter olympics in #PyeongChang2018 , South Korea on February 9-15, 2018. Best of luck!!! pic.twitter.com/Z7ScouYgtg

The website clarifies how Abeda qualified stating that he secured his spot on the Eritrean team under alpine skiing’s so-called basic quota rule.

It grants all National Olympic Committees the right to enter one male and one female competitor, provided they meet the minimum performance standard.

Ethiopia nestled in the Horn of Africa region gained its independence in 1991. They made their Olympic debut nine years later. Eritrean athletes compete more in long distance running and cycling. Their sole medal in 2004 was a bronze by runner Zersenay Tadese in men’s 10,000 meters.

Ghana and Nigeria are other African countries that will be in South Korea later this month for the games. Ghana’s qualification was made possible by one Akwasi Frimpong, a Ghanaian – born skeleton athlete. He will become the second Ghanaian to participate in the Winter Olympics.

Skeleton is an individual winter sliding sport in which a person rides a small sled, known as a skeleton bobsled (or sleigh), down a frozen track while lying face down (prone).

Nigeria’s female bobsleigh team have also declared their preparedness to do Africa’s most populous nation proud.