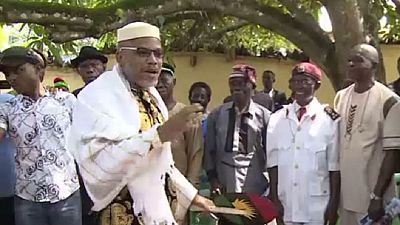 A court in Nigeria’s capital, Abuja, has upheld an earlier ruling that pro-secessionist group, Indigenous People of Biafra (IPOB), is a terrorist group.

The court presided over by Justice Abdul Kafarati ruled that the Attorney General of the Federation had used proper legal processes to apply for IPOB’s proscription in September 2017.

The group through its lawyer, Ifeanyi Ejiofor, challenged the proscription order arguing that the government had violated the rights of the group having secured the order ex parte.

An ex parte motion is one that does not require the other party to be represented for the court to take a decision. The judge said the AG having the consent of the president was enough grounds for the earlier proscription ruling.

The judge also ordered the applicants to pay 500,000 naira as damages stressing that the rights of IPOB members had not been abused by the legal processes.

The group based in Nigeria’s southeast has been pushing for secession following a similar independence struggle that happened decades ago.

Leader of the current struggle, Nnamdi Kanu, has been missing since September 2017 after his followers clashed with the Nigerian Army in his hometown of Umuahia in Abia State.