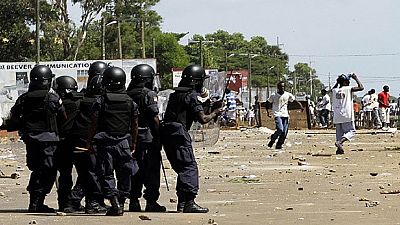 Zambian troops entered a slum in Lusaka on Friday to restore order after residents rioted over a curfew and ban on street vending imposed to control a cholera outbreak, state radio said.

The riots in the densely populated Kanyama township were sparked after police sealed off a market where trading had been banned on Sunday, when the curfew was declared.

Cholera has killed more than 60 people in the Zambian capital since it broke out there in October.

Street vending and public gatherings were banned across Lusaka to prevent the spread of the disease, but residents of Kanyama, where around 370,000 people live, have been defying the order at night.[nL8N1P20C6]

Reuters could not immediately confirm that troops had entered Kanyama, but Local Government and Housing Minister Vincent Mwale said police had been sent there to stop rioting.

Peter Zulu, a local resident, said rioters had blocked Los Angeles Road, a major thoroughfare, and that police had fired teargas to try to disperse them.

Main opposition leader Hakainde Hichilema called for calm in Kanyama, a stronghold of his United Party for National Development.