S.African comedian to co-host The Daily Show with Trevor Noah 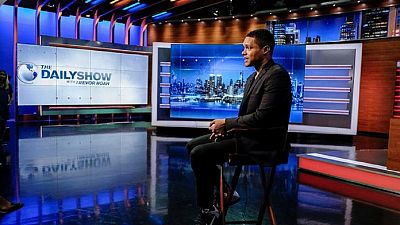 Two years after Trevoh Noah took over the hosting of the Daily Show on Comedy Central, another African has been selected to co-host the popular American political satire show.

The news of Loyiso Mandinga’s latest gig was confirmed by Comedy Central, the channel which airs the Daily Show, through a tweet saying ‘Mandinga will present local segments for Africa, reporting outside the US for the African broadcast’.

BREAKING NEWS!!! – TheDailyShow announces Africa’s own LoyisoMadinga to helm local segments for Africa, reporting outside the US for TrevorNoah ??????? pic.twitter.com/F6EOQYCzR1

The South African comedian who takes pride in his humble roots in the Eastern Cape of South Africa says this opportunity is not just about him.

‘‘This isn’t even about me. This is about SA comedy and comedy in Africa. We’re all grinding so damn hard to make this thing work and this only happened because the hard work, love and dedication we all put into this is obvious to the world,’‘ Mandinga posted on his Instagram account.

Describing the role that his compatriot will take on the Daily Show, Trevor Noah joked that the show is giving an opportunity to other countries besides the United States to show off their ‘stable geniuses’.

“As wild as Donald Trump is for America, many countries around the world have Trumps of their own and since The Daily Show is in many countries, we thought ‘why not give each country a chance to show off their stable geniuses?’,” said Noah.