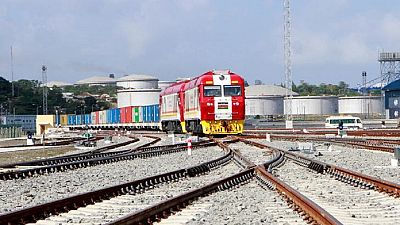 The first standard gauge railway cargo train arrived in Kenyan capital Nairobi from Mombasa at the ultra-modern inland container depot which was launched by President Uhuru Kenyatta a fortnight ago.

The arrival of the cargo train is in line with President Kenyatta’s promise to reduce the cost of doing business in the country.

In his New Year message, President Kenyatta said the new commercial cargo train would cut costs and delays in trade for Kenyans and its neighbours.

While the meter train used to carry twenty to thirty containers, the standard gauge train will carry 216 containers

The President said the delivery of a world-class railway on time and within budget, would attract world-class manufacturing and value-addition investments, which are critical to creating jobs and business opportunities.

The cargo train carried 104 containers, which is almost equivalent to the trucks operating daily on the Mombasa-Nairobi highway.

According to the Kenya’s Ports Authority head of Inland Container Deports Symon Wahome, the new commercial cargo train will revolutionize the transportation of cargo in Kenya.

The historic maiden cargo trip however got mixed reactions from Kenyans, who used social media to express themselves.

In a well developed economies Train should transport raw material to the factory or finished goods back to the market.In kenya Chinese are funding SGR to help them move our goods to the port then to their country and export it back to kenya as their dumping site…

Good news 4 Kenya. My views on your tweet and comments it elicits
1. Fact check the info https://t.co/Rreg6raT2E
2. Yours is a thankless job focus on result
3. Lots of Kenyans dont know economic benefits of SGR
4. Concern on drivers job loss is real concrete steps to mitigate https://t.co/elJnvdxdoL

So beautiful. Hope SGR will move towards Western Kenya to stop this road accidents.