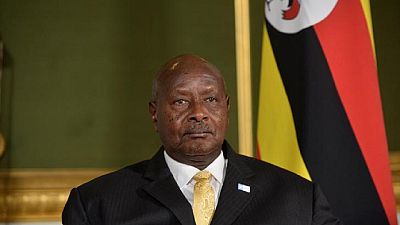 In a message that Ugandan media houses were compelled to broadcast, President Museveni blasted religious leaders who criticised the age limit constitutional amendment.

The Ugandan parliament recently amended the constitution removing age limits for presidential candidates, extending the term of elected officers of government from 5 to 7 years and restoring presidential term limits.

The amendment was very controversial, sparking off numerous physical fights in parliament, protests on the street and condemnation from religious leaders.

Instead of working for the independence of Africa, they are always in cahoots with foreigners – encouraging the latter to meddle in our affairs.

In his end of year message to the country, President Museveni accused religious leaders of pushing the agenda of foreign forces striving to meddle into the affairs of Uganda.

According to the president, these church leaders ought to have talked more about what he calls the “the strategic goals of our dear Africa.”

The five strategic goals set by past African leaders, he says, included regaining independence; attaining democracy; working for the prosperity; guaranteeing our strategic security through the political integration of as much of Africa as possible in the form of political federations like the East African Federation; and guaranteeing the survival of our identity as Black People without losing our languages, culture, customs, foods etc., to avoid becoming Black Europeans.

“To some of those elements, the five strategic goals do not exist. What, apparently, matters to them is political power for the political groups they fancy,” charged the president.

‘‘Instead of working for the independence of Africa, they are always in cahoots with foreigners – encouraging the latter to meddle in our affairs.’‘

The president went ahead to call religious leaders out on what he called ‘arrogance’ bordering on ‘betrayal’.

“This is assuming they do not have evil intentions which would be worse. That would make them into the Kayaffas, the Chief Priest that betrayed Jesus.”

His inspiration from the bible was also extended to the 317 members of parliament who voted in favor of lifting the age limit. .

“Remember what Jesus said in Matthew Chapter 5 Verses 11-12. It says: “Blessed are you when they revile and persecute and say all kinds of evil against you falsely for my sake. Rejoice and be exceedingly glad, for great is your reward in heaven, for so they persecuted the prophets that were before you”.

“Therefore, NRM cadres and all patriots; false accusations are nothing for we transcended the firing squads of Idi Amin, the extra-judicial killings, the imprisonments, the losing of comrades in battles, etc.”

The message was derided on social media by Ugandans who had already expressed shock that all media houses in the country had to broadcast the president’s address;

Hahaha, that they did it for Africa. The day this guy falls, Africa will congratulate Uganda and wish us well just liked it happened in Zimbabwe.

Hehehehe
What about that verse about reaping what you sow!

I don't think that coating blatant lies with a few bible verses will actually make it truth,we know which people are arrogant and its mostly the people close to you KagutaMuseveni