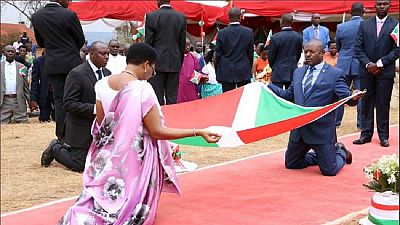 The annual National prayer Retreat organised by Burundi’s First Family has kicked off in the stadium of the province of Kayanza.

The objective of the week long crusade is to thank God for his actions in Burundi throughout the year, but also to entrust him with the year 2018.

The crusade was opened by none other than Burundi’s president Pierre Nkurunziza and his wife Denise, in the stadium that was yet to be filled up.

Almost every year, Burundians have an appointment with these ecumenical prayers that concern Burundians of all stripes. The high and mighty usually attend the prayers with the country’s vice president gracing this year’s prayer and thanksgiving crusade.

Burundian blogger Spageon Ngabo believes that the prayers are a convenient way of pretending that ‘everything is fine’ amidst real difficulties at the political, economic, judicial and human rights levels.

“A Christian must give thanks to the Lord, both in misery and happiness,” he quipped.

Nkurunziza is an openly born -again christian who usually organises prayer meetings and crusades with his wife. He reportedly travels with a choir and made it clear to leaders in the government when he took office in 2005 that prayer is a priority.

His critics rubbish his ‘pious’ stance, pointing at his refusal to leave power, ‘violation’ of the constitution and human rights abuses as direct contradiction to his professions of faith in God.

Since 2015, Burundi has been plunged into a political crisis that was sparked off by the participation in the April 2015 presidential election of President Pierre Nkurunziza, accused of running for a third term, in contradiction with the Constitution.

This crisis, which has left hundreds of people dead, has come to rub off on the country’s economy.

The International Criminal Court (ICC), which Burundi officially quit in October this year, announced in mid-November that it was launching an investigation into human rights violations and crimes against humanity allegedly committed by the government. Burundians since April 2015.