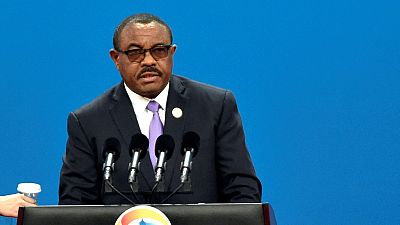 Hailemariam Desalegn, the Ethiopian Prime Minister says the government will do everything possible to shore up deteriorating security across the country.

The Premier in a statement quoted by the state-affiliated FBC sent condolence messages to the families of persons affected by the three-pronged security crisis.

His statement also assured that the government had opened investigations into the crisis with the assurance that persons found culpable were going to be held responsible for their actions.

Violent incidents across universities in the country claimed the lives of a number of students. The situation led to the deployment of police and the army to campuses whiles a number of universities suspended studies. The Education minister said it was a political crisis by anti-state actors.

Last week in the town of Chelenko in Oromia region’s East Hararghe Zone, sixteen people were reported to have been killed when federal security forces fired live bullets at protesters who hit the street over the death of an acquaintance.

Over the weekend, spokesperson for the Oromia region confirmed an escalation in a border crisis between the Oromia and Ethiopian-Somali regional states. According to Addisu Arega Kitessa, the latest deaths led to the killing of 29 Oromos and 32 Ethio-Somalis.

Hailemariam particularly labeled the attack on displaced Somalis sheltering at a police station as a massacre. With the promise to get to the bottom of the attack.

He also assured that the government was doing everything possible to avert further escalation of the security challenges. He said Addis Ababa will do all within its power to ensure the safety of citizens and to guarantee peace and security across the nation.