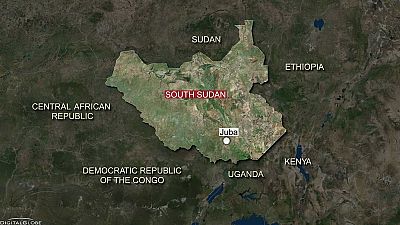 At least 45 people have died in fighting between ethnic groups in South Sudan’s northern state of Western Lakes, a local official said.

The deadly attack was launched against the Ruop on Friday by the Pakam fighters , in retaliation for attacks that were carried out by a group of Ruop youth on Wednesday and Thursday.

“It was a very heavy fighting, it has left more than 45 people dead and many injured,” Shadrack Bol Maachok, the state’s information minister said.

The minister said South Sudan’s military, SPLA has deployed troops from the state capital, Rumbek, to try and stop the violence that is characterised by burning down houses and property.

We hope to engage the leaders of the fighting parties to press the need to refrain from revenge attacks. We will also intensify patrols to deter further violence

The death toll is likely to climb even as the UN mission in South Sudan UNMISS estimates more than 50 dead. UNMISS says it has dispatched a military patrol to the area to establish the level of destruction and the impact on civilians.

“We hope to engage the leaders of the fighting parties to press the need to refrain from revenge attacks. We will also intensify patrols to deter further violence,” UNMISS said.

Violence between rival communities is common in parts of South Sudan, often triggered by quarrels over scarce grazing land and cultural and political grievances. But the death toll is rarely large.

The minister said this week’s skirmishes stemmed from disputes dating back to 2013 but it was not clear what exactly sparked the grievances.

South Sudan was plunged into civil war in 2013 after a political disagreement between President Salva Kiir and his former vice president Riek Machar escalated into a military confrontation.

The fighting has killed tens of thousands, uprooted about a quarter of the country’s population of 12 million people and adversely affected its small, oil-dependant economy.

UN officials this week appealed to the body’s security council to sustain the current mandate of UNMISS which expires in a week’s time. The peacekeepers on this UN Mission have often played a critical role in protecting humanitarian facilities, facilitating aid delivery in areas plagued by insecurity, and on many occasions contributed to the evacuation of humanitarian personnel caught in active hostilities.

Regional partners including the Intergovernmental Authority on Development IGAD and the African Union have also stepped up their efforts to revitalize the peace process; IGAD through the High-level Revitalization Forum (HLRF), which aims to secure a cessation of hostilities, implementation of the 2015 Peace Agreement, and the development of a revised and realistic timeline for its implementation and the African Union through its Peace and Security Council which has expressed intent to consider punitive measures against those who aim to spoil the peace process.