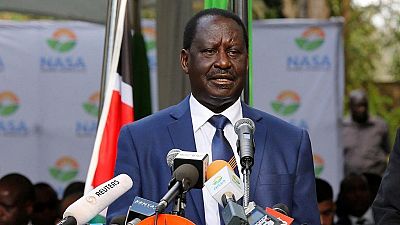 The venue of the planned meeting that the government has already warned against is hover still being kept a secret.

“We are not turning back. Actually, Nasa’s vehicle has no reverse gear and from tomorrow, it will not have brakes,” Oduor Ong’wen, a member of the National Super Alliance’s People’s Assembly Organising Committee.

We are not turning back. Actually, Nasa’s vehicle has no reverse gear and from tomorrow, it will not have brakes

Shortly after the swearing-in ceremony of president-elect Uhuru Kenyatta, Kenya’s main opposition leader Raila Odinga announced that he too would be sworn in on December 12.

The country’s attorny general has since warned that such an action would be an illegaity attracting charges of treason.

The United States has also called on Raila Odinga to call off the planned inauguration ceremony arguing that it would only serve to further polarise the country.

These proclamations have however failed to dissuade the opposition coalition who are planning an event that will be celebrated like a typical national event.

According to the NASA officials, the programme will start with the national anthem, followed by prayers, then announcement and adoption of the agenda.

There will then be a ceremony to install “the people’s leader”, after which speeches shall be conducted.

A ‘people’s assembly’ shall also be installed followed by speeches from representatives of counties.

Raila Odinga and other NASA leaders are expected to head out after the event and hold rallies across the country.