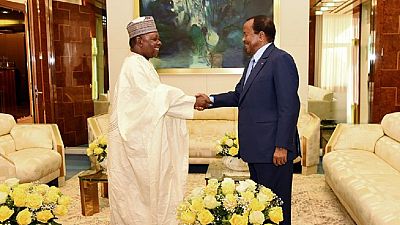 Nigeria says it is against activities of pro-secessionist groups in neighbouring Cameroon, according to its High Commissioner designate to the Central African neighbour.

Lawan Abba Gashagar in a meeting with the Cameroonian president Paul Biya on Thursday said Nigeria will neither support nor encourage secessionists but would rather collaborate to secure the territorial integrity of Cameroon.

President Biya last week declared war on secessionists in the country’s Anglophone region. A heavy military deployment has followed his declaration with people said to be fleeing the two regions – the northwest and southwest.

Both Nigeria and Cameroon are battling with separatist groups, the respective governments have stressed that unity was non-negotiable.

Whereas the Anglophone minority in Cameroon are protesting marginalization by the French majority which events have led to the creation of a so called Ambazonia state. Security forces continue to clampdown on their activities.

Over in Nigeria, the Indigenous People of Biafra (IPOB) group until recently were repeatedly clashing with the military. Its leader Nnamdi Kanu is still missing for over two months now. IPOB is also an independence battle of states in Nigeria’s southeast.