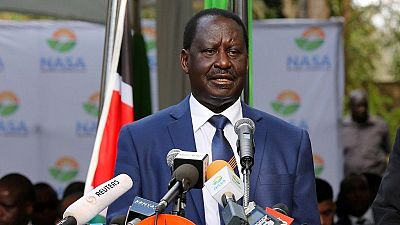 Kenya’s Attorney-General Githu Muigai has warned against plans to swear in the National Super Alliance (Nasa) leader, Raila Odinga as the ‘people’s president’ on December 12.

Prof Muigai, the chief legal adviser to the government, on Thursday said swearing-in Raila Odinga would be an illegality attracting charges of treason.

He said such an inauguration would be outside the Constitution because Kenya already has a sitting president who took the oath of office on November 28.

"I reiterate any attempt to swear in any person as president other than the one elected in line with the constitution and in a manner provided for in the law is unlawful, illegal null and void ab initio"

Prof Muigai said the government would not stop at anything to prevent the breach of the rule of law and the constitution.

Any person who takes part in such an inauguration, he said, will face the law. Treason charges attract the death sentence in Kenya.

“I reiterate the any attempts to swear in any person as president other than the one elected in line with the constitution and in a manner provided for in the law is unlawful, illegal null and void ab initio,” Prof Muigai told journalists at the State Law office in the capital Nairobi.

The Nasa coalition is planning to swear in Raila Odinga using the results of the August 8 presidential election on Tuesday to coincide with Republic (Jamhuri) Day celebrations although they have not disclosed the venue.

Odinga, who pulled of the October 26 repeat presidential poll, has maintained that he won the August 8 poll but was rigged through the manipulation of numbers in IEBC servers.

At the same time, the AG warned the 11 counties that passed the people’s assembly motion, saying they have committed illegalities.

Such devolved Houses, he said, may be surcharged for misusing taxpayers’ money.

He said the national government retains the right to review the funds allocated to the concerned counties.

The AG’s warning came hours after Odinga told the US and other western powers that have advised against the planned swearing-in plan to back off.

The US, Odinga said, should not talk about the violation of the constitution as far as his swearing-in is concerned yet Washington DC has been “loudly silent” on killing of innocent protesters by police since August.

“We thought we had friends but we were wrong and now we know they are enemies. Up to today, no single ambassador has condemned the killing of people by police,” he said.

“The western countries should, therefore, keep off the affairs of the country as Kenyan problems will only be solved by Kenyans themselves.”

He spoke at the City Mortuary in the capital Nairobi when he met and condoled with families that lost their loved ones during the post-poll chaos.