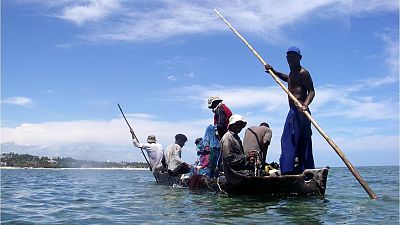 Fishing communities in Kenya’s southern coast are taking steps to conserve marine life that is under threat, by creating underwater gardens in the Indian Ocean.

Fishermen and other residents in Wasini Island hope that they can replace destroyed coral reefs with new ones, to help harbor fish and draw hundreds of thousands of tourists who come to visit Kenya’s coast each year.

The project was started in 2014 and the fishermen were later trained by conservationists on how to cultivate the coral gardens.

Boat operators help fund the program while divers go down to the ocean floor to cement the corals in place.

The large-scale collapse of coral reefs has exposed Kenya to increased erosion and the loss of fisheries. Reefs provide home for marine life.

The eastern African countries of Mozambique, Tanzania and Somalia as well as the Indian Ocean island nations of Seychelles, Mauritius and Comoros are also affected.

Muhidhin Musa is a fisherman who volunteers on the project.

“The coral have really improved our livelihood here in Wasini Island. It has made the Island famous by making it a tourist attraction. It has developed our community because we now have many visitors who want to come and see how we are transplanting corals at Wasini. They come in large numbers,” he said.

About 20 kilometers away, another project at Gazi Bay has also seen residents get cash payments for keeping mangrove trees for carbon storage.

Since 2011, residents of Makongeni and Gazi villages – home to about 6,000 people – began working with the Kenya Forest Service and the Kenya Marine and Fisheries Research Institute (KMFRI) to protect 117 hectares (290 acres) of mangroves – about 20 percent of the mangrove forest in Gazi Bay.

In 2013, the Mikoko Pamoja community organization, one of the groups conserving mangroves here, signed an agreement with the Kenya Forest Service to sell carbon credits from the project for 20 years and to plant 4,000 mangrove trees annually to replace those harvested legally or lost to illegal harvesting.

Communities measure the size of the trees in each plot and calculate their rate of growth, to come up with a figure for their carbon storage capacity and to generate carbon credits.

The trees absorb carbon dioxide, the main greenhouse gas from burning of fossil fuels, and store it in their roots. And their growth can help counteract the effects of rising sea levels as it elevates coastlines.

James Kairu, is the chief scientist at KMFRI.

“Here in Gazi we get 1.5 tonnes per hectare, that is the carbon stored below ground and if you add the one which is stored above ground which is up to 500 (tonnes) we are talking about 2,000 tonnes of carbon in the system. So you can imagine when you have such a rich eco-system. When that ecosystem is degraded you emit all that carbon dioxide into the atmosphere and above that mangroves are a home for fish, home for other wild life and are important for shoreline protection and moreso they are natural resources that people harvest for firewood and energy,” said Kairu.

Residents who are protecting and replanting mangroves on over 100 hectares are now selling 3,000 tonnes of carbon credits a year to international buyers, for about $5-$6 a tonne.

The money goes into financing more forest protection and restoration and to community-chosen projects.

According to the KMFRI, coastal mangrove forests also slow down coral reef sedimentation, and protect coastlines from severe weather events.

Coastal mangroves are among the most endangered ecosystems on earth, according to the United Nations.

Gabriel Grimsich is a programmes management officer, at UNEP.

“In the last 100 years we have lost at least one third of the world’s mangrove forests, they are actually being lost at a rate, three to five times higher than average deforestation rates of other forests so these are very vulnerable eco-systems. Coral reefs are also very vulnerable especially to climate change even small changes to temperature over a sustained period of time can cause mass mortality and the bleaching and death of many corals and in the last thirty years we’ve lost about half of the world’s live coral cover and so these are astonishing figures in very short periods of time we have lost a significant proportion of the world’s mangroves and the world’s corals,” said Grimsich

Under the United Nations Framework Convention on Climate Change, Kenya has committed to reducing emissions of climate-changing gases by 30 percent by 2030.