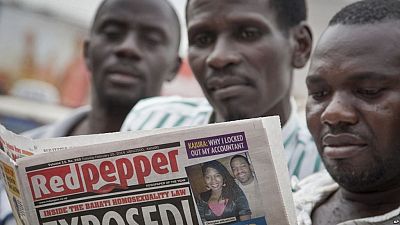 Eight managers and editors of a daily newspaper on Monday were charged with several offences including libel and computer misuse and a court ordered them detained until December 5.

The journalists have been in detention for nearly a week after police raided the premises of Red Pepper accusing them of publishing a false story.

Police had said on November 23, 2017, that they had preferred several charges including treason against the journalists. Their lawyer, Maxma Mutabingwa, said that when they appeared in court for the first time on Monday, treason was not among the offences read out to them.

“I think police backed off the treason charge because it was ridiculous, it was not sustainable at all,”

Instead they were charged with several counts of libel, offensive communication and publication of information prejudicial to security.

“I think police backed off the treason charge because it was ridiculous, it was not sustainable at all,” he told Reuters.

The journalists applied for bail but the state prosecutor said he needed time to respond and court adjourned the proceedings to December 5.

The raid on the paper followed publication of a story that, citing unnamed sources, said that Rwanda believed Ugandan President Yoweri Museveni was plotting to oust its leader, Paul Kagame.

The paper has a wide readership and often regales its audience with a surfeit of salacious content about private lives of political and business officials and celebrities.

In recent years it has moved to include more political coverage and has some times irked authorities with audacious headlines on security, diplomacy and power maneuvers in the government of President Yoweri Museveni.

Police has kept the media outlet’s premises cordoned off. It has not published the daily since the raid. Computers, phones and other equipment confiscated during the search have also not been returned, Mutabingwa said.

Rights groups and journalists have complained of escalating harassment and intimidation of independent media by security personnel in the East African country especially as Museveni faces growing opposition pressure to end his rule.

Local media, including Red Pepper, have reported this month on tensions between Uganda and neighboring Rwanda over a range of economic and security disputes but Uganda’s foreign affairs ministry has dismissed the reports as rumors.