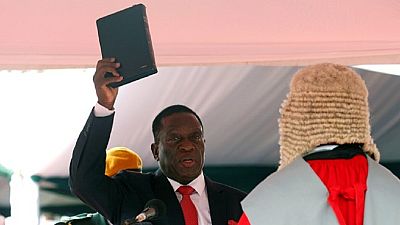 Emerson Mnangagwa has been sworn in as Zimbabwe President in a ceremony at a packed stadium in the capital, Harare.

The swearing in follows the dramatic departure of Robert Mugabe after 37 years in power.

The former vice-president’s dismissal earlier this month led the ruling Zanu-PF party and the army to intervene and force Mr. Mugabe to quit.

Mr. Mnangagwa, who had fled the country, returned from exile on Wednesday. Nicknamed “the Crocodile,” Mnangagwa took over the reigns as Zimbabwe’s second president.

It was his driving ambition to take over as leader which set off a bitter succession battle with Mugabe’s 52-year-old wife Grace, triggering the crisis that toppled the long-serving president, who resigned on Tuesday.

Mnangagwa was dismissed as vice president by Mugabe on November 6, but the situation quickly turned around in his favor.

With his dismissal triggering a military takeover and mass street protest, which ended with the ousting of Mugabe and Mnangagwa catapulted to the centre stage.

A former close Mugabe ally, Mnangagwa’s initial fall from grace appears to have been engineered by the first lady, who lobbied her husband to back her own political ambitions.

It was the climax of a long feud between the pair over who would replace the ailing and increasingly frail 93-year-old leader.

But Mnangagwa’s dismissal alarmed the army, with the generals quickly moving in, staging a military takeover which brought him down within days.