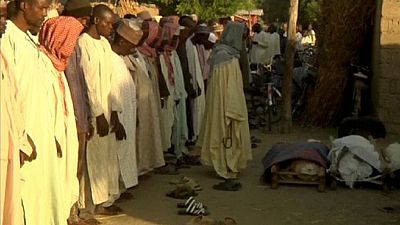 At least 50 people have been killed after a suicide bomber struck a mosque in Adamawa state, Northeast of Nigeria.

The incident happened as worshippers were arriving for morning prayers at the medina mosque in Unguwar Shuwa area of Mubi, some 200 kilometers by road from the Capital Yola, police said. The attack was carried out by a young man carrying explosives.

“So far we have had at least 50 dead from an attack at a mosque in Mubi,” Adamawa state police spokesman Othman Abubakar

It was a (suicide) bomber who mingled with worshippers. He entered the mosque along with other worshippers for the morning prayers.

He noted that several people were injured in the attack adding that they are uncertain of the figure as several have been taken to the hospital for treatment.

“It was a (suicide) bomber who mingled with worshippers. He entered the mosque along with other worshippers for the morning prayers,” he said.

Boko Haram militants held territory in Adamawa in 2014 but they were pushed out by Nigeria’s army backed by troops from neighbouring countries in early 2015.

Tuesday’s attack bears all the hallmarks of the terrorist group, whose modus operandi has been attacks on mosques and markets to inflict maximum damage.

In recent months, Boko Haram activity has been concentrated on the far north of Adamawa state, around Madagali, which is near the border with neighbouring Borno state.

At least two civilians were killed earlier this month when dozens of Boko Haram fighters tried to storm the town of Gulak but were repelled by soldiers.

There have been repeated suicide bombings in the area, which lies not far from the Sambisa Forest area of Borno, where the militants had a base.

At least 50 killed in mosque bombing in Nigeria https://t.co/J6ej3dBXje pic.twitter.com/GveiAvhvgl

Boko Haram fighters are also said to be hiding in the Mandara mountains, to the east of Adamawa state, which forms the border with neighbouring Cameroon.