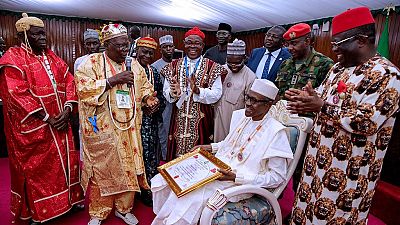 Nigerian President Muhammadu Buhari on Tuesday started his tour of the country’s southeast – known to be the heartland of the Igbo people.

It is Buhari’s first visit to the region since taking office in 2015. It also came amidst tensions over deadly clashes between the Nigerian army and separatist group, the Indigenous people of Biafra (IPOB).

Buhari arrived in Ebonyi State where he was received by the governor and other top brass of the ruling All Progressives Congress (APC).

The welcome also came with 2 Chieftaincy titles: Enyioma 1 of Ebonyi, which I am told means Trustworthy friend of Ebonyi; & Ochioha Ndigbo, which means Leader of Igbo people. I am a strong believer in the unity of Nigeria. Our diversity should be a source of strength not weakness pic.twitter.com/GJBJiH5tzg

Local media reports that there was heightened security presence during Buhari’s engagements including the hovering of a surveillance helicopter over capital of Ebonyi state, Abakaliki.

He heads next to Anambra State where a governorship election is slated to be held on November 18. IPOB have called on the people to boycott the polls adding a threat of death for all persons who defy their call.

The group had also threatened to disrupt Buhari’s visit to the southeast. They are pushing for a seperate Republic of Biafra, an earlier struggle that 50 years ago led to the loss of over a million lives.

Buhari is on record to have said that the unity of Nigeria was non-negotiable. The Army’s clashes with IPOB has led to deaths and detentions. IPOB leader Nnamdi Kanu is missing after a military raid on his family compound in Umuahia, capital of Abia state.

I thank the people of the Southeast for the enthusiastic welcome they’ve accorded me since I arrived this morning. From Enugu to Abakaliki, I have enjoyed a profuse display of warmth from everyone; political leaders, traditional leaders, citizens. I thank you all. pic.twitter.com/yxNhRFFmIw