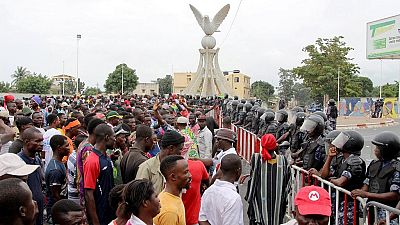 The United States Department of State has issued a travel alert for Togo to its citizens in the face of recurring political protests in the west African country.

The alert issued at the start of this week’s round of protests is to extend over a period of almost three months. ‘This Travel Alert expires on January 29, 2018,’ the statement issued on November 7 read.

It was the same day that the latest round of anti-government protests started. The three-day process was described by the opposition coalition as a success.

Speaking at a rally in the capital Lome, Brigitte Kafui Adjamagbo-Johnson, a member of this coalition of 14 political parties said the entire process from mobilization to execution had been smooth.

The coalition have yet to announce dates for another round of protests. Reports indicate that demonstrations failed to hold in the northern towns of Sokode and Bafile due to heavy security presence.

The Department of States added in its release: “Many protesters and security force members have been injured, and some killed, during the demonstrations, which began in August 2017. Security forces have used excessive force to disperse crowds.

“There are reports that government-sponsored vigilantes are using violence and the threat of violence to disrupt protests and intimidate civilians.”

They also cautioned about police use of tear gas to disperse demonstrations and the arrest of persons deemed to be involved. “Authorities have also interrupted internet and cellular data services, making communications difficult and less predictable,” they added.

Thousands of people took to the streets in the capital Lome and other major cities across the west African nation to continue calls for incumbent Faure Gnassingbe to step down immediately.

The government last week lifted a weekday ban on protests after the opposition vowed to defy it. According to the government, the decision was to allow for independent bodies to assess the political and security situation.

Beside his exit, the coalition also want the government to implement key political reforms such as a two-round voting system and reforms to the constitutional court.

A recent government move to introduce reforms failed to get parliamentary backing due to an opposition boycott. The government said at the time that the proposals were going to be decided via a referendum.

Other requests by the opposition parties include calling for the introduction of diaspora voting, independent inquiry into the deaths of protesters and the delivery of justice, the immediate release of political detainees and the cessation of arrests and persecution.