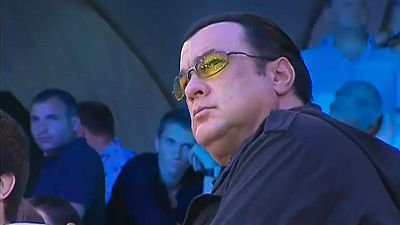 Without giving details of time and place, Ms de Rossi said that Seagall had unzipped his trousers at an audition.

My final audition for a Steven Segal movie took place in his office. He told me how important it was to have chemistry off-screen as he sat me down and unzipped his leather pants. I️ ran out and called my agent. Unfazed, she replied, “well, I didn’t know if he was your type.”

DeGeneres said she was ‘proud’ of her wife.

I’m proud of my wife. https://t.co/NABbOJoBrf

Now 65, he had already been accused of misconduct by a number of women.

Neither he nor his entourage have given an immediate response to the latest claims.