Truck plot 'not from our religion' says suspect's acquaintance 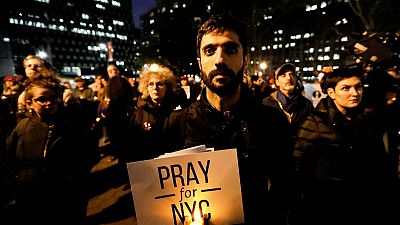 The FBI said it had located another Uzbek man whom it is questioning in connection with Tuesday’s attack.

The man, Mukhammadzoir Kadirov, has not been detained or arrested. A law enforcement official told the AP Kadirov was a friend of suspect Sayfullo Saipov’s and may not have any role in the case.

On Thursday, Kadirov released a statement to The Associated Press through a source in touch with his family. It reads: “It is so sad and unbelievable. This not from our religion. It is not acceptable. We as Muslims completely reject this kind of actions. No human being who has a heart can do this.”

Investigators and prosecutors are assembling a portrait of the man accused of carrying out the deadliest terrorist attack on New York City since Sept. 11, 2001, as a recently radicalized immigrant who closely followed the ISIS playbook.

Sayfullo Habibullaevic Saipov, 29, a native of Uzbekistan with no serious criminal record, was charged in federal court Wednesday with one count of material support to a terrorist organization and one count of violence and destruction of a motor vehicle.

Donald Trump’s latest response was in a late night tweet, saying that the attacker should be given the death penalty.

NYC terrorist was happy as he asked to hang ISIS flag in his hospital room. He killed 8 people, badly injured 12. SHOULD GET DEATH PENALTY!

Earlier he promised stricter US immigration laws that let Saipov into the country declaring that he might send him to Guantanamo Bay.

“My administration is coordinating closely between federal and local officials to investigate the attack and to further investigate this animal who did the attacking […] Send him to Gitmo. I would certainly consider that, yes.”

By sending Saipov to the military prison in Cuba it classifies him as an enemy combatant and would curtail his legal rights.

In a show of solidarity with the victims and their families, New Yorkers were joined by visitors to the city in holding a vigil.