Can a President Weah meet the expectations of Liberia’s slum dwellers? 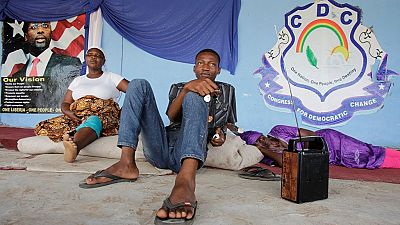 That ex-Liberian international, George Weah emerged leader in the first round of Liberia’s October 10, 2017 election did not come as a surprise to many.

In a crowd of 20 presidential hopefuls, he was among the top 3 fancied to succeed Nobel Laureate Ellen Johnson Sirleaf, the West African nation’s first leader after its traumatic 14-year civil war.

Weah, who until the 2017 election had made an unsuccessful attempt against Sirleaf in the 2005 polls, was senator for Montserrado County, which is home to Liberia’s capital, Monrovia. Even though many had alluded to his level of education and his political naivety as factors which contributed to his 2005 election defeat, many of his supporters say that was beside the point.

For his teeming supporters, what mattered was that Weah conceded defeat in that election, a move which has endeared him to many Liberians as it saved the country, which had just emerged from a brutal war, from sliding back to a state of chaos.

One of such ardent Weah supporters is 50-year-old Gertrude Weah. Africanews journalist Nii Akrofi Smart-Abbey met her in a dimly lit single room in the slum community of Flagba in Monrovia’s District 8.

Seated on a plastic chair with her grandson on her laps, Gertrude fans herself and the baby with a piece of cloth. There is so little light in the room that it took a while to see her clearly.

Like many in this riverside community, Gertrude moved from another part of Monrovia in 2016 to rent a single bedroom apartment in the slum when she could no longer afford to pay the rent for her two-bedroom apartment.

She was soon to discover that Flagba was not exactly the kind of community she was hoping for. The community lacks basic amenities such as toilets, potable water and electricity. As such, wooden platforms covered with zinc roofs on the water’s edge serve as toilets for the community.

Life in the community, Gertrude says is “difficult, very hard”.

“When it rains, the whole place is filled with water,” she says. “Our children cannot go outside. We have to stay inside until the water goes (down) before we come outside. We’re suffering and we’re not getting anything.”

The flooding in the community, according to Gilbert Garrison, another resident who has lived in Flagba for 25 years, can rise up to four or five feet high and can take up to 3 weeks for the flood waters to recede.
Garrison and his family moved to the slum community after his father, like Gertrude, could not afford to pay the rent for their former apartment.

Having lived in the slum community nearly all his life, Gilbert who is in his mid-thirties, says the conditions in the slum are getting worse by the years. In spite of the deteriorating situation, he says leaving the slum is not an option for him – at least not yet.

“There’s nowhere to move out (to) because we don’t have money. We’re out of school and there’s no job. No money to move anywhere”.

The rent for a single bedroom apartment in Monrovia, Gilbert says averages between $35 and $40 a month, an amount he says is far beyond the reach of the average unemployed Liberian.

“So can you imagine someone who is not working, where do you get that kind of money from? So it’s better I stay here. I don’t have money to rent in another area.”

Another part of the slum https://t.co/QLXvRNWoNW


Can conditions in Flagba get any better?

Like any slum community, the residents of Flagba feel abandoned by the central government and their district representative.

John, a 60-year-old musician who said he led a militia group during the civil war, says even though he supports Weah’s Coalition for Democratic Change (CDC) and wants Weah to lead the country, he campaigned against the CDC’s candidate for the House of Representatives, because “he is a pain in our backs”.

Garrison equally feels let down by the politicians whom he says always make promises but never get around to fulfilling them.

“People always say that when they come things will change and after we vote for them things still remain the same,” he says.

Even though he appears to be losing faith in what the politicians promise during campaigns, Garrison said he did his civic duty on October 10 but “I’m not certain that things will change”.

We're in one of Monrovia's slums, talking to the residents https://t.co/NvREKM7zoA


The case against the ruling UP party

‘Change’ has been on the lips of many Liberians in the lead up to the October 10 polls. The call for change has been fueled mainly by the anger of many towards the ruling United Party (UP) which they say failed to deliver what it promised Liberians 12 years ago.

President Sirleaf in her 2006 inaugural address, highlighted several programs she intended to undertake as part of getting Liberia back on track.

Among the many issues that topped her agenda were the restoration of the economy, restoring electricity to Monrovia, as well as “forcibly and effectively” fighting corruption as a way of ensuring Liberia “achieve our economic and income distribution goals”.

12 years on, she has made significant gains on the economic front such as successfully completing the Heavily Indebted Poor Countries (HIPC) Initiative which saw the elimination of the country’s long standing debts, improving GDP and reigning in inflation.

The country has also enjoyed peace and security with thousands of refugees who sought shelter in neighbouring countries such as Ghana and Ivory Coast returning to Liberia.

But it seems Liberians wanted more.

Harris who served as a polling agent for an independent House of Representatives candidate in District 8 told Nii Akrofi Smart-Abbey that even though he has great respect for President Sirleaf, he believes she and her UP party have still failed to deliver.

Sentiments such as these may yet explain why George Weah won 48.6% of the votes in Montserrado County whiles the ruling party’s candidate and incumbent Vice President Joseph Boakai polled 27.3%.

Mr. Boakai who used the analogy of a race car parked in the garage to defer criticisms of the UP’s failure during the first presidential debate ahead of the October 10 polls, says the race car (in this case him) needs to be put on the track to show what it is capable of.

But Harris and Gertrude for instance believe there is nothing the race car can do having been parked in a garage for 12 years.

“I don’t even want Joseph Boakai to get there because he stayed (in office) for 12 years they failed us, so I do not need him there,” said Gertrude forcefully.

Sun's up, so is #Monrovia . Back on the road for africanews Radio show callers this morning talking about change. #liberiadecides pic.twitter.com/9GDr3SYf6e


Tall order for a President Weah?

More than a quarter of Liberians voted for George Weah to become their next leader during the first round of the elections. One question that recurs is why?

Weah is world famous for his football prowess. He achieved great feats as a player including being the only African footballer to date to have won the coveted Ballon d’Or. So could the first round victory have been driven by his celebrity status as was the case for Donald Trump in the United States of America?

“When George Weah gets in that chair, I know that he will do (cater to us) for us the common people that are down. I know his ways, and I know that he’s been good to us when he started playing football.”

For Gertrude and most of Weah’s supporters, their faith in the man’s ability to turn their fortunes around is based on what they say is his ability to empathize.

“I know that when he goes there (the Executive Mansion) he will have feelings for us. That’s why I say I want him, I don’t know about other people but I want him to win,” she says.

The needs of the residents of Flagba might be long but they are also basic. Access to potable water, improvement in the community’s sanitation, having access to electricity which is currently intermittently provided to the community, jobs which will make it easy for parents and people of working age to be able to provide for their families and pay their children’s school fees so the kids stay in school.


Will this be a tall order for Weah to meet should he emerge winner of the November 7 runoff poll?

In a 2016 interview with a Nigerian website Daily Trust, Weah admitted to being “young and inexperienced” when he joined the 2005 presidential race.

“When I was joining politics, some people thought I was a joke. But here we are today, and I have the people’s mandate,” he told the website adding that “I believe I’m a good leader, with skills and the heart to make a positive difference.”

There are yet others like Tayor however, who think Weah cannot bring about the change Liberians expect.

She told the Reuters news agency that Weah is not the “rightful candidate we need right now for this country” because as Senator for Montserrado “since he entered the House of Senate, we have not seen anything tangible that he has done.”

Tayor says despite Weah’s seeming compassion for the ordinary Liberians, Weah has not invested in Liberia and its youth like other global football icons have done back in their home countries.

If Weah could repeat his overwhelming victory in the capital Monrovia, he may well be on his way to a second round victory as he comes up against the vice president, Joseph Boakai.

The Unity Party’s Chairman, Mohammed Ali however thinks there could be a repeat of the 2005 polls where Weah was in the lead but the UP overturned the results.

“In 2005, he had 29 percent and the Unity Party had 19 percent and we overcame that gap to win the presidency with Madam Sirleaf and we think we can still do that this time around,” he told the Reuters news agency.

Irrespective of who emerges victor at the end of the runoff poll on November 7, Liberians have a long list of things they want to see done.

Will George Weah, who so far is in the lead, have the capacity to meet those needs? It’s 2017 and he says he is no longer young and inexperienced in politics.

George Weah was mobbed by voters after casting his ballot. He reminded them there were there to cast theirs. africanews euronews pic.twitter.com/akceQdULVY