'Liberia is on track to achieving a credible poll' - ECOWAS, AU observer missions 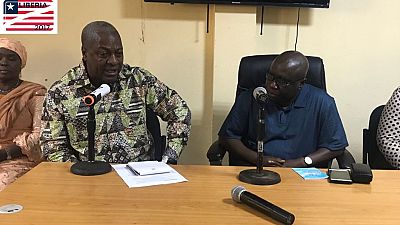 Election observation missions from the Economic Community of West African States (ECOWAS) and the African Union (AU) have jointly commended Liberia for conducting a smooth voting process devoid of any major incidents.

The Chairman of the ECOWAS mission, former Ghanaian president John Dramani Mahama said in a joint press conference on Wednesday that the counting and tallying process was done in a transparent manner.

“Thus far, given the environment before, during the polls and sorting process, Liberia is on track to achieving a credible poll,” he said.

Mahama also commended the security forces for curbing pockets of violence during the polls, he read to journalists in Monrovia as part of the mission’s preliminary report.

Thus far, given the environment before, during the polls and sorting process, Liberia is on track to achieving a credible poll.

This was corroborated by the leader of the AU mission, former AU Deputy Chairperson Erastus J. O. Mwencha who said “thus far, the election can be characterized as peaceful”.

“We hope the political environment doesn’t change drastically,” he added.

Mahama said the National Elections Commission (NEC) has committed to hold another credible election in the event that there’s no clear winner.

The October 10 elections ran smoothly with only one incident at a polling center in Nimba County where voting was disrupted. The NEC says a new date will be set for voting at the center where election materials were quarantined.

Turnout was huge as about two million voters queued on Tuesday to vote for a president – out of the 20 candidates -, and 73 lawmakers.

The electoral commission has not released provisional results by close of day Wednesday as vote tallying was ongoing.