AU's pledge of $100,000 relief items to Somalia in March just got delivered 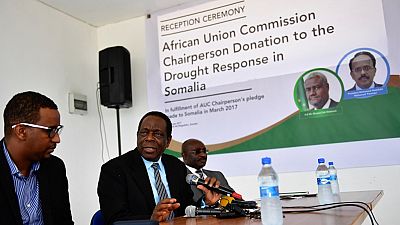 The African Union’s pledge of a $100,000 in relief items to drought victims in Somalia six months ago has just been handed over to the Somali government.

The assorted items including rice, sugar, beans and vegetable oil were handed over on Tuesday by the head of the African Union Mission in Somalia (AMISOM) Francisco Madeira on behalf of the Chairperson Moussa Faki Mahamat.

Moussa Faki Mahamat made the pledge on March 20 during a visit to Mogadishu immediately after his election as the new Chairperson of the African Union Commission.

At the time, Somalia was at the peak of the drought that left 2.9 million people at risk of famine and requiring immediate help, according to the UN.

Whereas this condition [drought] has had some slight differences, the humanitarian plight in Somalia still requires continued and stepped up support.

The AU says a total of 1.1 billion dollars was raised by the international community and Somali nationals in the diaspora to avert famine.

AMISOM head Madeira said the situation in Somalia is still fragile despite a slight improvement in the drought condition.

“Whereas this condition [drought] has had some slight differences, the humanitarian plight in Somalia still requires continued and stepped up support,” he was quoted in a statement released by the mission.

Experts met in Mogadishu last week to kickstart a Government-led Drought Impact Needs Assessment (DINA) to identify the drivers and impact of recurrent drought, and outline long-term solutions that can prevent famine as a result of drought.

During the previous famine in 2011, humanitarian response was slow and nearly 260,000 people died before it was officially declared a famine in July.