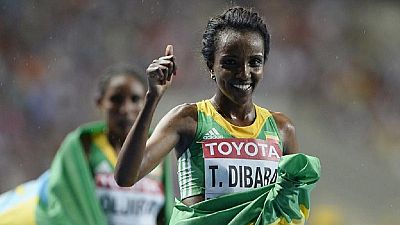 Congratulations to Tirunesh Dibaba, female winner of the 2017 #ChicagoMarathon, with an official time of 2:18:31! pic.twitter.com/r0CnMP03xI

She has won several laurels for the East African country at the Olympics and in other international competitions. Amongst her successes are: three Olympic gold medals, she is nine-time world champion and world record holder over 5,000m.

She took to social media platform, Twitter, to express her delight after the race. Dibaba in April this year run 2:17:56 to finish second at the London Marathon, she was beaten by record-breaking Kenyan competitor Mary Keitany who finished the race in 2:17:01.

I don’t have words to say how happy I am to win today! Thank you to my family, to the ChiMarathon , to NikeRunning & all who support me pic.twitter.com/cFDDryRYcO