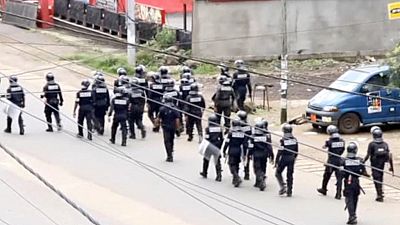 Witnesses and rights groups said troops and attack helicopters opened fire on protesters at the height of separatist rallies in English-speaking areas of Cameroon over the weekend, killing and wounding people.

The army dismissed the reports from sources in five towns as “completely false” and said helicopters had only been used for surveillance.

Any use of air attacks would mark a major escalation in a government crackdown on separatist protests that have been rumbling in Anglophone districts of the central African oil producer for almost a year.

Thousands took to the streets in towns across the Northwest and Southwest regions on Sunday, Oct. 1, calling for independence from the country’s French-speaking majority.

Rights groups said they started to collect reports on ensuing violence in the areas bordering Nigeria as the week progressed.

Eight people in the towns of Bamenda, Buea, Ndu, Tombel and Kumbo told Reuters that police and soldiers moved in to stop the protests and in some areas, low-flying attack helicopters fired tear gas and live rounds on the crowds.

“They were firing like in a war film,” he told Reuters.

Hilary Manjong, private secretary to a local Member of Parliament in Ndu, said witnesses had shared similar accounts with him.

Army spokesman Didier Badjeck dismissed the accounts. “Reports that the helicopters fired on protesters is completely false. The helicopters were only conducting surveillance,” he said.

The government earlier this week said about 10 people had died on Sunday including five in a prison fire that may not have been linked to the protests.

The governor of Southwest region, Bernard Okalia Bilai, told the Cameroon Tribune newspaper in an article published on Tuesday that protesters had ambushed soldiers in Kumba, forcing them to open fire in self defense.

Amnesty International told Reuters on Thursday that more than 20 people were killed between Oct. 1 and 2.

Demonstrations began nearly a year ago when Anglophone lawyers and teachers protested against having to work in French, saying it showed the wider marginalization of the English-speaking minority.

The protests gained support and have increasingly called for Cameroon’s five million English speakers to get their own country.

The rallies have also have become a lightning rod for opposition to President Paul Biya’s 35-year rule.

In the southwest town of Tombel, a resident who spoke on condition of anonymity told Reuters that a military helicopter came so low over the town center that the wind gusts threw a man off his motorbike.

First the helicopter fired teargas to disperse the crowd, then it opened fire, the resident said. “Normally they fire rubber bullets, but I could tell from the sound that these were real,” they added.

Outside Buea, police on the ground and a helicopter opened fire on protesters who had run into the bush to bypass a military checkpoint, said Louis Anuchem, a 35-year-old taxi driver from Buea.

“The helicopter came close to the ground,” he added. “We heard the gunshots and the bullets coming through the trees,” he told Reuters.

After the demonstrations police went door-to-door in some towns, rounding up young men and women, residents said.

“Soldiers came to our neighborhood and broke into homes and carried boys away,” said Lanya Joel, a 21-year-old Kumba resident. “I am scared and will be away until it’s all over.”

Rights group the Southern Cameroon’s Public Affairs Committee said in a report that a 12 year-old girl was shot by security forces from a helicopter in the town of Kumbo.

The Bamenda Provincial Episcopal Conference of Anglophone Christian Bishops said in a statement this week that is was disturbed by reports that “some of our Christians were … arrested, some maimed, and some were simply shot to death, some from helicopters.”

Helene Mekem said her son was shot dead by security forces outside his home in Kumba on Sunday, even though he was not involved in the protests.

“They are killing the innocent ones,” she told Reuters.