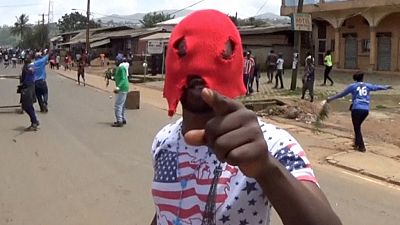 The United States (U.S.) government on Wednesday commented on the ongoing Anglophone crisis in Cameroon.

Washington like the United Nations and United Kingdom called for restraint and dialogue to be employed by both parties in a press statement issued on October 4, 2017.

The statement issued by the State Department spokesperson, Heather Nauert, whiles expressing concern about the situation said Washington found the use of force in handling protesters grievances as ‘unacceptable.’

The Cameroonian government’s use of force to restrict free expression and peaceful assembly, and violence by protestors, are unacceptable.

The full statement read as follows:

“The United States is deeply concerned about violence and the loss of human life in protests that have taken place in the Northwest and Southwest regions of Cameroon since October 1. The Cameroonian government’s use of force to restrict free expression and peaceful assembly, and violence by protestors, are unacceptable.

“We urge the Government of Cameroon to respect human rights and freedom of expression, including access to the internet. We call on all sides to exercise restraint from further violence, and engage in dialogue for a peaceful, durable resolution.

The embassy in Yaounde has since late September issued a series of security messages warning citizens of unrest in Cameroon’s Anglophone regions. They cautioned citizens to defer all but essential travel to the North West and South West regions.

They cited running battles between security forces and protesters demanding independence from the Central African country. The regions which have long complained of marginalization on October 1 intended to declare its freedom under the name, Ambazonia republic.

A heavy security deployment to the area clashed with protesters leading to deaths. The official toll was put at eight even though Amnesty International put it at 17 and the main opposition said 30 people had died. Dozens were injured whiles hundreds were detained by authorities.